The Parkland Students Aren't Going Away 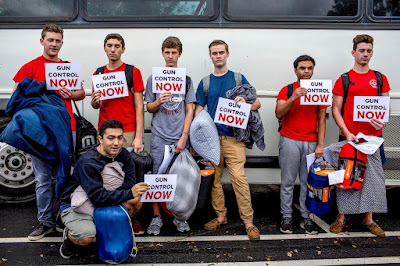 At least fifteen (15) brands have now ended their relationship with the NRA and pressure remains on others - FedEx which can be reached at 942 South Shady Grove Road, Memphis, Tennessee 38120, (901) 818-7500 being one of them - to do the same. True to form, the NRA (which is a front for gun manufacturers) is lashing out at major companies such as a who's who of rental car companies, United Airlines, Delta Airlines, Best Western and Wyndham Hotels, who have bowed to customer outrage over their affiliation with what more and more people see as an irresponsible toxic organization. Meanwhile, gun fanatics and right wing "news" sites are lashing out and disseminating lies about the students from Parkland, Florida, many of whom are articulate and show political savvy, who have seemingly put in motion a movement not seen in the wake of past mass shootings. A piece in The Atlantic looks at the phenomenon and why just maybe things will be different this time with the NRA and its spineless political whores in the Republican Party perhaps having met their match.  Here are article excerpts:


The aftermath of a mass shooting in the United States can feel like an all-too-familiar play.

Act I: Some combination of grief and shock and terror ripples across the nation, accompanied by a deluge of news coverage.
Act II: Gun-control advocates leverage the moment to call for stricter laws; those who oppose such restrictions offer their thoughts and prayers to victims but argue that gun control won’t help.
Act III: the inevitable deadlock. America moves on; America forgets. Nothing changes, except for those for whom everything has changed. Public opinion on gun control remains as divided as ever.

That play is following a different script this time around. The curtain has stayed up on Act II, as survivors of what is now the deadliest high-school shooting in modern U.S. history have prevented the play from proceeding along its typical trajectory.  . . . . the Parkland, Florida, teens’ tweets, essays, and television appearances—equal parts fierce determination and fervent agony—have been the public-facing cry of what they have dubbed the “Never Again” movement.

Countless factors could explain why their activism on gun control has so quickly evolved into a national movement. And one could be Parkland’s demographics. People in Parkland tend to be well-off. The median household income in the city is just over $128,000, according to census data, compared with less than $53,000 for the (massive) surrounding Broward County.

That comparable affluence could be key to understanding why Never Again’s youth leaders seem to be building so much political clout in a debate that until now seemed impossibly stuck. (And, realistically, may still be.) It could also be key to understanding why similar efforts led by disadvantaged youth in recent years have gained little, if any, meaningful traction.

“It’s mind-blowing that while [the Parkland students] are still in the first days of dealing with trauma, anger, grief, they’re putting it toward really careful and thoughtful political and civic action—it’s just amazing,” said Meira Levinson, a Harvard Graduate School of Education professor whose research focuses on civic education and youth empowerment. “At the same time, it’s also important to recognize that other young people have done this [activism] also within days—they’re experiencing the same grief—and haven’t gotten the attention that these [Parkland] students have.”

It quickly became clear that these survivors were poised to spearhead a political movement whose message is so loud, and so raw, it’s continued to dominate mainstream news coverage and radio shows and even late-night comedy a week after the shooting—an unusual phenomenon in today’s real-time news environment. They’ve written haunting op-eds and delivered viral speeches; they’ve instigated rallies and prompted nationwide walkouts by students and teachers.

Now they’re planning—from their parents’ living rooms—a massive demonstration to take place in Washington, D.C., next month. The “March for Our Lives” event already has a sophisticated website with a mission statement and merch for sale—and, like the historic Women’s March last January, it is inspiring satellite protests not just across the U.S. but also across the globe.

Triple-digit donations from the likes of George and Amal Clooney and Oprah are helping to make all of this possible. Donations to the march’s GoFundMe campaign have been on the rise since the effort was launched several days ago, and organizers have in turn continued to increase the funding goal. As of Friday evening, donations totaled roughly $2.3 million.

Why is there suddenly so much traction? . . . . Historically, affluence has often been key to gaining political leverage, and to ensuring that leverage has translated into actual policy change. “Citizens with low or moderate incomes speak with a whisper that is lost on the ears of inattentive government, while the advantaged roar with the clarity and consistency that policymakers readily heed,” reads a 2004 report by an American Political Science Association task force on inequality and democracy. U.S. senators’ voting patterns, for example, correspond far more closely with the preferences of their wealthier constituents than with those of their less-affluent ones.

It isn’t hard to see why: As detailed in a 2002 study by the political scientist Larry Bartels, compared to their lower-income counterparts, wealthy Americans are more likely to have access to information about policies and to in turn form sophisticated opinions about those policies; they’re also more likely to vote in elections and have direct contact with public officials. And of course, they’re more likely to donate to political campaigns.

Schools such as MSD—where three in four students passed some or all their AP tests during the 2009-10 school year and where participation in the gifted program was nearly twice the national rate—are far more likely than their lower-performing, under-resourced counterparts to teach kids about civic engagement.

Aspects of this instructional focus can be seen in how the Parkland students have responded to the shooting. The 17-year-old David Hogg, a student journalist, filmed and interviewed his classmates while they took shelter from the gunman—footage that, he explained in a CNN interview, he gathered in part so he could later sway politicians’ opinion on gun control. Asked about whether she’d prepared for the political activism she’s now demonstrating, Jaclyn Corin, also 17, explained to The New Yorker writer Emily Witt that a few months earlier she’d worked on a 50-page project about gun control for her AP composition-and-rhetoric-class. And as one Buzzfeed article noted, the MSD activists planning the March for Our Lives largely know each other from the school’s theater program; the skills honed in the dramatic arts—confidence, persuasive communication, creativity, stage presence—can be very useful in effective political activism.

But scholars suggest that other realities could be at play, too. One is extremely straightforward: It costs money to engage in the kind of activism that the MSD students are undertaking—the trips to the state capitol in Tallahassee and D.C., for example, and the freedom to dedicate time to this campaign rather than to a part-time job or to caring for a younger sibling.

Levinson cited research showing that the concerns of middle-class and affluent students, particularly those who are white, are “more likely to be interpreted as universal” whereas the concerns of their lower-income peers of color are more likely to be regarded as relevant to and true of a small percentage of kids. “Their experiences are not niche; they’re not a side show,” she said. “But for some reason the people in power, including people like us [journalists and academics], tend to see kids like those in Parkland as being our kids and as representing nationwide concerns as opposed to kids protesting in Chicago, Philadelphia, New York.”

A confluence of phenomena likely explains why the Never Again youth see their political clout growing exponentially: their educational experiences and social capital and political savvy; their advantage as middle-class Americans whose message resonates across demographics; the way in which mounting anxiety about and the almost-overwhelming media coverage of mass violence is making gun control seem more and more like a universally personal and high-stakes cause . . . .

In Trump [the most unpopular of the last dozen presidents] , the students of Parkland have a target for their rage, something survivors of shootings during the Obama era lacked. It’s possible that just having that target—one that a lot of the public is similarly enraged against—has enabled their words to reach a wider audience.

Against this backdrop, maybe the outrage that had been bubbling up amid Columbine and Sandy Hook—and the steady sequence of often-overlooked school shootings—finally hit a tipping point.

Whatever the reason, the MSD teens’ Never Again crusade seems to have provided the ingredients America needed to free itself from that paralysis.

Posted by Michael-in-Norfolk at Sunday, February 25, 2018