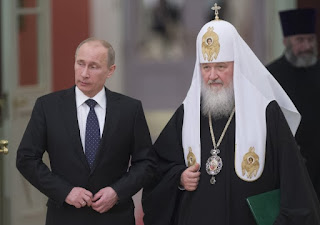 Throughout Russia's history the Russian Orthodox Church has typically been on the side of autocracy, has fought any and every progressive idea, and worried more than anything else about its own wealth and power.  Indeed, the Church opposed even small moderate changes that might have helped Russia avoid the horrific 1917 revolutions.  Now, Putin, like some of the most insidious tsars from Russia's past has allied himself with the Russian Orthodox Church to bolster his base of power .  In exchange for such support, Putin has given the Church free reign to push its archaic, anti-modernity, anti-knowledge based agendas.  Adding to the toxic mix has been the efforts of American Christofascists to export their anti-gay animus and contempt for modern democratic norms.  In Russia, this embrace of ignorance is fueling a HIV epidemic that is rapidly ravaging the heterosexual population.  Unlike other modern nations that are seeing their rate of increase of HIV cases drop, Russia is seeing explosive increases that rival those of sub-Saharan Africa, an area known for its lack of education and susceptibility to Christofascist propaganda.  A piece in Politico looks at the disaster taking place in Russia.  Here are excerpts:

The Kremlin and its allies are pushing a socially conservative, hands-off, and often church-influenced approach to sexual and reproductive health, as well as drug policy. Fueling an epidemic, state policies and inaction have led to more cases than ever of Russians contracting or dying from HIV/AIDS.

At least 14,631 Russians died from AIDS-related symptoms in the first half of 2017—an increase of more than 13 percent from the year earlier. Russia now hosts the largest HIV epidemic in Eastern Europe and Central Asia, which, along with the Middle East and North Africa, make up the world’s only two regions where the rate of HIV cases is rising.“It’s explosive,” says Christopher Beyrer, an epidemiologist and professor at Johns Hopkins University who previously served as president of the International AIDS Society and helped run an anonymous HIV testing facility here in Moscow before pulling out due to Russian policy hostile to U.S. funding. “The policies that they have been sticking to in the Russian Federation and attempting to impose in countries they seek to control are clearly not evidence-based,” he adds, calling the shocking rise in HIV rates a clear “failure of policy and practice.”In January 2016, Russia registered its millionth HIV-positive person, a 26-year-old woman. Actual numbers are likely much higher, according to health experts. Across much of the world, including the United States, the rate of HIV is declining, thanks to strategic programs like clean needle exchanges, increased awareness and better access to antiretroviral therapy. In the U.S., for example, the annual number of overall HIV diagnoses decreased by 5 percent between 2011 and 2015, according to the Centers for Disease Control and Prevention. But that’s not the case in Russia: Here, the rate of HIV infections is rising faster than in sub-Saharan Africa, host to the world’s largest HIV epidemic, where an international effort has slashed the rate of new HIV infections.Russia’s growing HIV crisis is seemingly no match for the Orthodox Church, which preaches faith and family values as the cure-all for the virus. A burgeoning alliance between Russian President Vladimir Putin and the church in recent years has fueled an environment where sexual education in schools is forbidden, clean needle programs are shunned as sinful and attacks on women’s and gay rights are state-sanctioned.Further blocking access to health care and resources, Putin signed a controversial church-backed bill into law in 2013 that criminalized the dissemination of information about homosexuality to minors—or, in government terms, “propaganda of nontraditional sexual relations.”But it wasn’t just the Russian Orthodox Church: U.S. evangelical funding and influence have also fueled the conservative tide in Russia, says Dr. Breyer. “The [anti-gay law] language was in some cases lifted whole from legislation passed in Nigeria and Uganda,” he says, referring to the U.S. Christian right’s influence on anti-gay legislation in parts of Africa.Patriarch Kirill, head of the Russian Orthodox Church, who has deemed Putin’s presidency a “miracle from God,” has called for the “establishment of family values, ideals of chastity and marital fidelity” and a focus on “moral education”—not sexual education. The church’s presence on social issues is so suffocating that one researcher working on issues of HIV in Russia quipped that he saw “more Orthodox priests than condoms” at a recent HIV conference in Moscow.Despite the rising number of new HIV infections, Russia is not increasing the amount of HIV medication accessible to the public or ramping up health education efforts. Instead, parents are expected to educate their children at home on the risks of unsafe sex and drug use. HIV experts say that’s largely still not happening, and a generation of children are growing up without life-saving knowledge of HIV and its risks.

Meanwhile, top Russian officials cast doubt on the need to combat the disease. Deputy Director Tatyana Guzenkova of RISS, for example, has said that the HIV epidemic is merely an “information war” waged by the West on Russia.

In the past, most HIV positive Russians contracted the virus through intravenous drug use. That’s changing: The number of people contracting HIV from heterosexual sex will soon overtake new HIV infections from drug use, according to experts. And an increasing number of newly infected Russians—some 38 percent in 2015—are women.As Russia’s decades-long HIV crisis takes on a different shape, experts say more and more Russians like Ivanova—non drug-using Russians who are part of mainstream society—are becoming infected, although drug-use is still a leading factor fueling the country’s HIV epidemic.