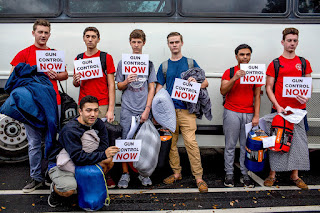 The majority of the bad decisions and policies of older Americans - especial so-called conservatives and Republicans - will disproportionately harm Millennials and other younger generations.  They are being saddled with the now likely $2.5 trillion increase in the national debt flowing from Trump/GOP tax cuts for the wealthy and corporations, they see wages remaining stagnating while their counterparts in Europe have better chances of upward social mobility, and they far too many older voters clinging to their guns and bibles as they push an agenda that is the antithesis to the gospel message. Indeed, one-third of those under 30 are now "Nones" who have walked away from organized religion and one truly cannot blame them.  Now, in the wake of the Parkland school massacre, just maybe Millenials are on the point of saying "no more!"   An op-ed in the New York Times looks at how, if the nation is lucky, the Millenials will rise up and over turn the current corrupt political scene.  Here are highlights:

As with all historic tipping points, it seems inevitable in retrospect: Of course it was the young people, the actual victims of the slaughter, who have finally begun to turn the tide against guns in this country. Kids don’t have money and can’t vote, and until now burying a few dozen a year has apparently been a price that lots of Americans were willing to pay to hold onto the props of their pathetic role-playing fantasies. But they forgot what adults always forget: that our children grow up, and remember everything, and forgive nothing.

Those kids have suddenly understood how little their lives were ever worth to the people in power. And they’ll soon begin to realize how efficient and endless are the mechanisms of governance intended to deflect their appeals, exhaust their energy, deplete their passion and defeat them. But anyone who has ever tried to argue with adolescents knows that in the end they will have a thousand times more energy for that fight than you and a bottomless reservoir of moral rage that you burned out long ago.

The young — and the young at mind — tend to be uncompromising absolutists. They haven’t yet faced life’s heartless compromises and forfeitures, its countless trials by boredom and ethical Kobayashi Marus, or glumly watched themselves do everything they ever disapproved of.Yet this uprising of the young against the ossified, monolithic power of the National Rifle Association has reminded me that the flaws of youth — its ignorance, naïveté and passionate, Manichaean idealism — are also its strengths. Young people have only just learned that the world is an unfair hierarchy of cruelty and greed, and it still shocks and outrages them. They don’t understand how vast and intractable the forces that have shaped this world really are and still think they can change it. Revolutions have always been driven by the young.To those of us who have lived with certain grim realities our whole adult lives — the widening moat between the rich and the rest of us, the sclerotic influence of money on politics, the N.R.A.’s unassailable coalition of greed and fear — they seem like facts of life as unalterable as death itself. . . . We spend $60 billion a year on pets but won’t go to any inconvenience to keep second graders from getting slaughtered. Despite all our competitive parenting and mommy machismo and trophy kids, we don’t really give a damn about our children — by which I mean, about one another’s. When a race stops caring for its young, its extinction is not only imminent but well deserved. But maybe my bitter complacence about our civilization’s irreversible decline is just a projection of my feelings about my own.Harvey Weinstein ultimately wasn’t the one enforcing the code of silence around his predations: It was all the agents and managers and friends and colleagues who warned actresses that he was too powerful to accuse.  Once people stopped believing in his invulnerability, his destruction was as instantaneous as the middle school queen being made a pariah. Watch: As soon as the first N.R.A. A-rated congressman loses an election, other politicians’ deeply held convictions about Second Amendment rights will start rapidly evolving.

The students of Parkland are like veterans coming home from the bloody front of the N.R.A.’s de facto war on children. They’ve seen their friends, teachers and coaches gunned down in the halls. To them, powerful Washington lobbyists and United States senators suddenly look like what they are: cheesy TV spokesmodels for murder weapons. It has been inspiring and thrilling to watch furious, cleareyed teenagers shame and vilify gutless politicians and soul-dead lobbyists for their complicity in the murders of their friends.

One of my students once asked me, when I was teaching the writing of political op-ed essays, why adults should listen to anything young people had to say about the world. My answer: because they’re afraid of you. They don’t understand you. And they know you’re going to replace them.

My message, as an aging Gen X-er to millennials and those coming after them, is: Go get us. Take us down — all those cringing provincials who still think climate change is a hoax, that being transgender is a fad or that “socialism” means purges and re-education camps. Rid the world of all our outmoded opinions, vestigial prejudices and rotten institutions. . . . — rip it all to the ground.

Perhaps I've always been an idealist, but one with a large dose of pragmatism.  Between our children and our large circle of friends that includes many of younger generations, I like to think I have not become ossified and willing to settle for the status quo.  All Millennial need to do to make a true political revolution happen is get out in mass and vote.  They are now the largest generation.  They can start by voting against every politician (generally Republicans) who continues to cower before the NRA and/or take its money.
Posted by Michael-in-Norfolk at Saturday, March 03, 2018