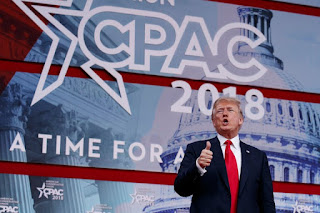 Conservatism has morphed into something both ugly and frightening.  The rise of Trump - who cares only about his own power and constantly fluffing his insatiable ego - has made what was already a growing cancer withing so-called conservative circles.  The cancer has metastasized and what was long known as conservatism in America is dead.  While most people outside of the political junkie set do not follow the events at the annual CPAC gathering, what was on display this year was complete insanity with a large measure of fascism.  Indeed, long time conservative columnist Mona Charen needed to be escorted out by security personnel after she called out the extremism on open display throughout the gathering.  The irony, of course, is that the falsely termed "conservative Christians" in attendance now support an agenda that is the antithesis of Christ's gospel message.  A column in the Washington Post looks at the death of American conservatism.  Here are excerpts:

It is time to read last rites over the American conservative movement. After years of drifting steadily toward extreme positions, conservatism is dead, replaced by a far right that has the Republican Party under its thumb.

Conservatism is a complex creed, some of it less than appealing and some of it noble. The less-attractive kind involves an ideology whose main purpose is to defend existing distributions of power and wealth, and to resist reforms that might redress the grievances of those facing discrimination and marginalization.

The enticing brand of conservatism is rooted in an affection for a particular place and its way of life. This conservatism is not always opposed to reform because reforms are often required to preserve the arrangements its exponents revere. Conservatism’s positive function is to warn against measures designed to fix things that are wrong, but whose main effects are to undermine institutions that are widely valued.

Conservatism is more about tweeds and a good scotch. Neither brings to mind incitement and divisive anger.

Yet for two decades, the tweedy sort of conservatism has been giving ground to the extremists who want not simply to defeat their adversaries but to crush them; who traffic in conspiracy theories rather than in respect for facts and history; and who are willing to destroy the very institutions they claim to be trying to save.   This has happened before (as when the white South’s displaced leadership backed the Ku Klux Klan to end Reconstruction after the Civil War), and we are seeing it anew in the age of President Trump.

The Conservative Political Action Conference (CPAC) in recent days was a clear demonstration of the far right’s success in displacing anything that deserves to be called conservative.

Before President Trump, it would have been shocking to see Marion Maréchal-Le Pen, a leader of the French neo-fascist National Front, appear at the same event with traditional conservatives such as Vice President Pence and Sen. Ted Cruz (R-Tex.), and also with the president of the United States. But thanks to Trump, European-style ethno-nationalism has become so much a part of the movement that Maréchal-Le Pen’s visit seemed almost natural.

Encouraging responsibility in the sale and use of firearms would seem to be a thoroughly conservative cause, an effort to maintain order and protect the innocent from violence. But the National Rifle Association is one of the most powerful forces within the Republican Party and the conservative movement. It uses paranoid rhetoric and incendiary attacks on its foes to justify riotously permissive firearms policies that no other democratic republic would dream of adopting.

Shamefully, Wayne LaPierre, the NRA’s top gun who is increasingly becoming America’s extremist in chief, showed few signs of being moved by the slaughter of high school students and teachers at Marjory Stoneman Douglas High School in Florida.

What should worry us is that the radicalism of the NRA is not exceptional on the American right. It is what the right is all about.

This was brought home when the conservative writer Mona Charen had the courage to ask the crowd on Saturday why CPAC had invited Maréchal-Le Pen (“the Le Pen name is a disgrace,” she said) and called out “people on our side for being hypocrites about sexual harassers and abusers of women.”  . . . . She needed to be accompanied by security guards when she left.

And The Post’s Dave Weigel reported on an otherwise little-noticed CPAC speech by White House Counsel Donald McGahn linking Trump’s judicial appointments to his dismantling of regulation. . . . . McGahn is describing a judicial branch that is little more than an instrument of right-wing executive power. This should scare us, too.

[I]f those who still believe in moderation don’t face up to it now, they will be complicit in the far right’s ascendancy.


As for Charen, she describes her experience in a piece in the New York Times where she says she was proud that she was booed by the hideous gather.  Here are highlights:


I’ve been a conservative my entire life. . . . . So you’d think that the Conservative Political Action Conference, or CPAC, would be a natural fit. It once was. But on Saturday, after speaking to this year’s gathering, I had to be escorted from the premises by several guards who seemed genuinely concerned for my safety.

What happened to me at CPAC is the perfect illustration of the collective experience of a whole swath of conservatives since Donald Trump became the Republican nominee. We built and organized this party — but now we’re made to feel like interlopers.

[T]oo many of us have given up the fight. We’ve let disgust and dismay lead us to withdraw while bad actors take control of the direction of our movement.
CPAC has become heavily Trumpified. Last year, they invited alt-right provocateur Milo Yiannopoulos (and withdrew the invitation only after lewd tapes surfaced). This year, in addition to the president and vice president, CPAC invited Marion Maréchal-Le Pen, granddaughter of Jean-Marie Le Pen and niece of National Front leader Marine Le Pen.

Matt Schlapp, CPAC’s chairman, described her as a “classical liberal” on Twitter. This is utter nonsense. Ms. Maréchal-Le Pen is a member of the National Front party, and far from distancing herself from her Holocaust-denying, anti-Semitic and racist grandfather, she has offered him a more full-throated endorsement than her aunt has.

So it has come to this: a conservative group whose worst fault in years past may have been excessive flat tax enthusiasm now opens its doors to the blood and soil nationalists of Europe.

While there were reasonable, mainstream Republican speakers at CPAC, the lineup also featured demagogues . . . .

How can conservative women hope to have any credibility on the subject of sexual harassment or relations between the sexes when they excuse the behavior of President Trump? And how can we participate in any conversation about sexual ethics when the Republican president and the Republican Party backed a man credibly accused of child molestation for the United States Senate?

I watched my fellow panelists’ eyes widen. And then the booing began. . . . I almost welcomed it. There is nothing more freeing than telling the truth. And it must be done, again and again, by those of us who refuse to be absorbed into this brainless, sinister, clownish thing called Trumpism, by those of us who refuse to overlook the fools, frauds and fascists attempting to glide along in his slipstream into respectability.

For traditional conservatives, the past two years have felt like a Twilight Zone episode. Politicians, activists and intellectuals have succumbed with numbing regularity, betraying every principle they once claimed to uphold. But there remains a vigorous remnant of dissenters. I hear from them. There were even some at CPAC.

Just before I reached the exit, a woman approached me and called my name. “That was so brave!” she told me.

Sadly, had more Republicans put principle and decency ahead of winning, Trump would not be in the White House.  There are indeed times when losing is winning. Charen and other traditional conservatives have discovered this far too late.