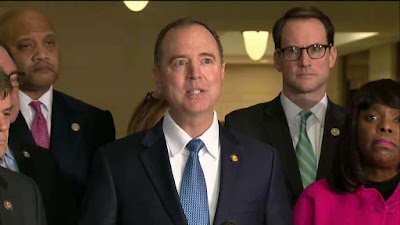 Lost somewhat in the noise surrounding CPAC, the battle against the NRA and the constant lies flowing from the Trump/Pence regime is the release of the Democrat memo that responded to Devin Nunes' fictional and disingenuous memorandum that sought to discredit the FBI and CIA to undermine the serious issues surrounding the investigation into Trump campaign collaboration with Russian intelligence operatives to throw the 2016 presidential campaign to Trump and also undermine American democracy in general.  As expected, the Democrat memo debunks the fictions pressed in the Nunes memo, a memo many believe was drafted with input from the White House.  A column in the Washington Post looks at  the quiet release of an important document.  Here are highlights:

The House Intelligence Committee released on Saturday a redacted version of a Democrat-authored memo rebutting GOP allegations that federal law enforcement agencies used politically-biased information to conduct surveillance on one of the president’s former campaign aides.” The memo, as Democrats promised, does debunk and undermine many of the allegations made in the memo released by House Intelligence Committee Chairman Devin Nunes (R-Calif.).

[T]he memo from committee ranking member Rep. Adam B. Schiff (D-Calif.) states there was ample evidence to conduct surveillance of Carter Page entirely apart from the dossier compiled by Christopher Steele, including “contemporaneous evidence of Russia’s election interference; concerning Russian links and outreach to Trump campaign officials; Page’s history with Russian intelligence; and … Page’s suspicious activities in 2016, including in Moscow.”
Notice that the memo says the suspicious activities included not merely the trip itself but activities in Moscow. If the FBI had detailed knowledge of Page’s activities beyond his bizarre pro-Russia speech, that could provide insight into the interaction between the Trump campaign and the Russian campaign for then-candidate Donald Trump. Those activities reportedly include meeting with Igor Sechin, a close associate of Russian president Vladimir Putin, to discuss energy deals if sanctions were lifted and meeting with a senior Kremlin official who disclosed that the Russians had compromising information on Hillary Clinton and that such information might be released to the Trump campaign.

The memo confirms that the FBI investigation began on July 31, 2016, well before the receipt of the dossier, and that it was based not only on information about George Papadopoulos’s  efforts to reach out to Russians but also on information about “Russia’s aggressive covert operations to influence our elections, which the FBI was already monitoring.” Schiff goes on to explain that by the time it received the dossier there were “sub-inquiries” into multiple people linked to the campaign. (The exact number of these is redacted.)

While the memo is heavily redacted, it does state that the Justice Department provided additional information in FISA renewals obtained through multiple independent sources that corroborated Steele’s reporting. What is intriguing here is that nearly the entire section supporting that conclusion is blacked out. What parts were confirmed? How were they confirmed? We still don’t know, but the prospect of ample corroboration of the dossier’s allegations (salacious or not) should be extremely troubling to the Trump team.

The memo also states that “Russian agents previewed their hack and dissemination of stolen emails.” Was this a heads-up to Roger Stone? If they were previewing the email release to anyone associated with the Trump campaign, that surely constitutes collusion by anyone’s definition.

In sum, the memo seems to undercut the gravamen of Nunes’s conspiracy theory, namely that the entire investigation was premised on a partisan dossier financed by the Clinton campaign. Even more important, it also hints at a wealth of information not yet revealed that may substantiate ties between the Russians and the Trump campaign. The more of these ties, the more people involved and the more detailed these interactions were, the more likely, of course, is that someone, at some point told Trump or his inner circle about them. If Schiff intended to whet our appetite for more details and confirm the extent of the Trump campaign-Russia ties, he succeeded.