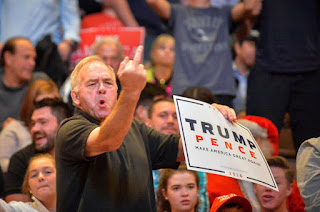 One of the most maddening things most of the news media does is to call evangelical Christians "conservative" Christians or right wing political extremist s like those found at CPAC "conservative."  Neither group is conservative in the historic sense of the word and both groups push an agenda that is radical and anything but truly conservative.  In the case of the falsely labeled "conservative Christians", they want a theocracy and they want to place themselves above the laws that govern others and an unlimited right to discriminate against others.  The "political conservatives" likewise are pushing a radical agenda that would undermine constitutional government and undo decades of non-discrimination policies.  In the final analysis, the two groups are religious fanatics and white supremacists and worse.  A piece The Raw Story makes the case that they must cease being labeled "conservative" since the term gives them far more outward respectability than they deserve. Here are article excerpts:

Modern Western conservatism came into being in response to the American and French Revolutions. Like liberalism, it has waxed and waned as a political movement during the decades since. According to some historians, the origins of contemporary American conservatism can be traced to the 1920s, only to fade during the New Deal. Its subsequent resuscitation is probably best dated to 1950s and 1960s.Some key historical signposts then and after include the following: The founding of the National Review magazine in 1955, and the publication of Ayn Rand’s Atlas Shrugged in 1957. White Southern reaction to the Civil Rights revolution of the 1950s and 1960s, which ultimately led to majority-white affiliation with the Republican Party.But what is political “conservatism”? And are self-styled conservatives really conservative?Merriam-Webster defines conservative” as “tending or disposed to maintain existing views, conditions, or institutions.” Similarly, the Oxford English Dictionary defines a conservative as “a person who conserves or preserves something; an adherent of traditional values, ideas, and institutions; an opponent of social and political change.”These definitions are unhelpful and misleading. Self-proclaimed political and social conservatives are not necessarily inclined to support or maintain the “traditional” social order – that is, long-standing majority views, conditions, institutions, or legislation. These include government regulation of corporations, banks, and Wall Street, progressive income taxes, Social Security, Medicare, Medicaid, public education, civil rights, voting rights, environmental regulations, and public-lands conservation. Self-identified conservatives also oppose other traditional institutions, practices, and measures, such as the United Nations, international standards for the treatment of prisoners of war, labor unions, collective bargaining, fair labor standards, and, for some, public fluoridation of water. The measures conservatives oppose were legislated, created, or practiced 50 to 100 or more years ago.Nor do many self-proclaimed conservatives embrace the 242 year-old, traditional proposition in the Declaration of Independence that “all men are created equal” – i.e., “men” as in “all humans,” including people of color and women . . . . . Moreover, so-called conservative Constitutional “originalists,” such as the late Justice Antony Scalia, were and are ever ready to reinterpret the US Constitution to serve their prejudices or benefactors.Nor are self-proclaimed conservatives always opponents of social and political change if overturning current social and political norms serves their own beliefs and interests.To be sure, there are factions of conservatives: the far Right (e.g., American Nazis, fascists, and Breitbart owners, writers, and readers), paleocons, neocons, the religious right, libertarians, Tea Party populists, the Freedom Caucus, “moderate” Republicans, . . . . Nonetheless, somewhere in their minds, they share a common conservative core of ideas, notions, and emotions. In his book, The Reactionary Mind, political scientist Corey Robin argues that there is a fundamental “reactionary thrust” in conservatism – namely, the conviction that “some are fit to rule others.”Conservatism in all its forms is oppositional and reactionary at its core. As Karl Mannheim argued, they oppose “other ways of life and thought that appears on the scene.”

It would be better for all if self-styled conservatives heeded the advice of the early nineteenth-century English churchman and academic, Arthur Stanley, who observed that “conservatism . . . destroys what it loves because it will not mend it.”

Posted by Michael-in-Norfolk at Sunday, February 25, 2018