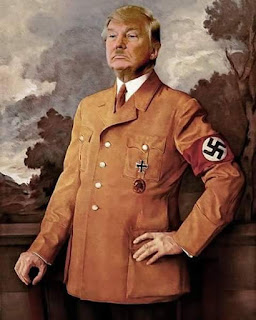 Many pundits decry comparisons of Donald Trump's flirting with fascism and the rise of Hitler in early 1930's Germany.  I can understand their reservations given that Trump has as yet not created his own brown shirts to assault opponents and voices of opposition.   That said, there are very real similarities between Hitler's creation of the myth that Jews were enemies of the Reich and Trumps statements that "Islam hates us" and his targeting of Hispanic immigrants for the hate and ire of his ugly base of supporters.  Worse yet, his supporters seem only too willing to resort to physical violence against those who protest Trump and /or his policies.  Lastly, Hitler's full campaign of hate and genocide wasn't launch fully formed but rather emerged over time as Hitler and his supporters gathered power.  Would Trump morph into a Hitler?  Perhaps not, but some of his supporters seem more than ready and willing to engage in genocide and murder.  First, The Hill looks at Trump's effort to hold out Islam at large and all Muslims by extension as enemies of America (he, of course, ignores what America did under the Bush/Cheney regime to inspire hate).  Here are highlights:

Donald Trump said Wednesday that he thinks “Islam hates us” and said it’s “hard to separate” the religion from radical offshoots.

When Cooper asked if hate was “in Islam itself,” Trump said: “You’re going to have to figure that out, OK?

“It’s radical, but it's very hard to define; it’s very hard to separate because you don’t know who’s who,” Trump said when asked if there was a war between the West and radical Islam.

Trump, who has previously called for a temporary ban on non-U.S. Muslims entering the country, said Wednesday, “We can’t allow people coming into this country who have this hatred of the United States.”


As a historical reminder, Adolph Hitler said this about Jews:

“The struggle for world domination will be fought entirely between us, between Germans and Jews.  All else is facade and illusion.  Behind England stands Israel, and behind France, and behind the United States.  Even when we have driven the Jew out of Germany, he remains our world enemy.  - Rauschning,Hitler Speaks,p. 234

I believe that I am acting in accordance with the will of the Almighty Creator: 'by defending myself against the Jew, I am fighting for the work of the Lord.'
-Adolf Hitler (Mein Kampf)

The last quote no doubt plays well with Trump's evangelical Christian supporters. As for Trump's would be brown shirt supporters, the  Washington Post  looks at the recent attack on a black protester at a Trump rally.  Most chillingly, the attacker states that perhaps next time they should kill the protester.  Here are excerpts:

Multiple videos show a protester at a Donald Trump rally in North Carolina being sucker-punched by a Trump supporter.

The videos, which appeared on social media early Thursday and are shot from different perspectives, show an African American with long hair wearing a white T-shirt leaving the Trump rally as the audience boos. He is being led out of the rally by men in uniforms that read “Sheriff’s Office.” The man extends a middle finger to the audience on his way out.

Then, out of nowhere, the man is punched in the face by a pony-tailed man, who appears to be white, in a cowboy hat, black vest and pink shirt as the crowd begins to cheer. The protester stumbles away, and then is detained by a number of the men in uniforms.

John McGraw, 78, was charged with assault and disorderly conduct in connection with the incident, Cumberland County Sheriff’s Office spokesman Sean Swain told The Post on Thursday. In footage published by Inside Edition, a man identified as McGraw is asked if he liked the event. “You bet I liked it,” he says.

When asked what he liked, he responds: “Knocking the hell out of that big mouth.”
“We don’t know who he is, but we know he’s not acting like an American,” McGraw added. “The next time we see him, we might have to kill him.”

This apparently is part of how Donald Trump and his fascist and racist supporters want to "make America great."