Apple's Tim Cook - Amazing, Although Not One of Alabama's Favorite Sons 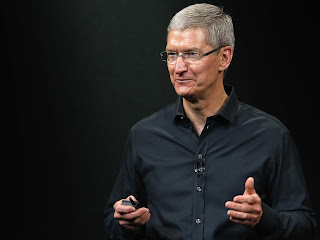 I happened upon a piece in the Washington Post that looks at Apple CEO Tim Cook - the only openly gay head of a major Fortune 500 company - and his roots in tiny Robertsdale, Alabama, located between Mobile, Alabama, and Pensacola, Florida, on the road to Gulf Shores which is sometimes called part of the "redneck Riviera" although locals refer to the area as "LA" - lower Alabama. It's an area I know form my years with an old aristocratic law firm in Mobile right out of law school, although the entire time I lived on the east side of Mobile Bay and closer to Robertsdale.  The Post piece shows several things, not the least of which is that one's small town beginnings do not necessarily define one's future potential.  The second thing it shows is the animus that gays still face in many parts of Alabama, especially in the more rural and small town regions.  Here are some article excerpts:

ROBERTSDALE, Ala. — There are few clues that this is the home town of Apple chief executive Tim Cook, the place where he said his “most improbable journey” began and where he forged the beliefs that today put him at the center of a national debate over privacy.

His name is not noted on the town’s welcome signs along the main drag, Route 59. There’s nothing in the local chamber’s brochures, and the local paper rarely has anything about him. His old high school keeps a glass case celebrating former NFL running back Joe Childress, Class of 1952, but not the leader of the world’s most valuable company, Class of 1978.

Walking around the town and talking with residents, it can feel as if Cook is a forgotten favorite son.

“I kinda wonder about that sometimes, I really do,” said Rick Ousley, a former classmate who recalls Cook fondly and now runs a computer repair shop in town.

Cook never sought out attention and many here are quietly proud of him, but Ousley suspects the lack of recognition is also tied to Cook’s prominent positions on sensitive social issues. Cook, who is gay, has advocated for gay rights. He once criticized Alabama for its lack of progress in a speech at the state capitol in Montgomery. He also helped fund a gay rights initiative in the Deep South.

“That was offensive to a lot of people down here,” Ousley said. One local pastor even vowed to stop using his iPad because of the Apple leader’s views.

Now, Cook, 55, has taken another risky stand, this time on privacy. He and Apple are fighting a federal court order demanding the Silicon Valley firm help the FBI crack the passcode-locked iPhone belonging to one of the San Bernardino terrorists. The FBI has accused Cook of only wanting to protect Apple’s brand. But Cook, in his soft Southern drawl, has repeatedly argued the FBI’s request is wrong in moral terms, calling it “bad for America.”

Cook’s experiences growing up in Robertsdale – detailed by him in public speeches and recalled by others — are key to understanding how a once-quiet tech executive became one of the world’s most outspoken corporate leaders. Apple has long emphasized the privacy of its products, but today Cook talks about privacy not as an attribute of a device, but as a right — a view colored by his own history.

For Cook, it was in this tiny town midway between Mobile, Ala., and Pensacola, Fla., that a book-smart boy developed what he calls his “moral sense.”

Cook seemed too aware of the injustices around him.  “I have to believe that growing up in Alabama, during the 1960s and witnessing what he did, especially as someone who is gay, he understood the dangers of remaining silent,” said Kerry Kennedy, a human-rights activist who has met Cook several times and whose father, Robert F. Kennedy, Cook considers one of his heroes.

In the early 1970s, he was riding his new 10-speed bicycle at night along a rural road just outside Robertsdale when he spotted a burning cross. He pedaled closer. He saw Klansmen in white hoods and robes. The cross was on the property of a family he knew was black. It was almost more than he could comprehend.

Without thinking, he shouted, “Stop!” The group turned toward the boy. One of them raised his hood. Cook recognized the man as a local deacon at one of the dozen churches in town, but not the one attended by Cook’s family.  The man warned the boy to keep moving.

“This image was permanently imprinted in my brain and it would change my life forever,” Cook recalled in a speech in 2013, an incident that he also has recounted to friends.

He made frequent visits to the small Robertsdale library, where he found a copy of “To Kill a Mockingbird” – published only a few years earlier — and devoured the story of a trial exposing the dangers of racism in a fictional Alabama town.

Growing up gay in small-town Alabama a generation ago meant knowing the value of privacy, recalled Paul Hard, 57, who was raised in tiny Demopolis, Ala. He doesn’t know Cook, but imagines what he went through, because he went through it himself.

Cook pushed this point even further when he took over Apple in 2011. He advocated for gay rights and to change laws in states such as Alabama, where employees can be fired for being gay. He criticized states with “religious freedom” laws that seemed to him to sanction some forms of discrimination.

Last December, shortly before the fate of a terrorist’s iPhone would explode onto the national scene, he accepted the Ripple of Hope award from the Robert F. Kennedy Center for Justice and Human Rights.

In his speech, Cook talked about learning to “take a stand for what is right, for what is just.”  And when the terrorist’s iPhone case erupted last month, Cook returned to that “moral sense” he learned back in Robertsdale.

There are many wonderful people in Alabama and just last Saturday evening the husband and I hosted a going away party for amazing friends moving back to Alabama for family reasons. Likewise, many Alabamians are kind and gracious, but more of them need to speak out and refuse to be silent as others in the state continue to tie the state's name to hate and bigotry.
Posted by Michael-in-Norfolk at Monday, March 07, 2016