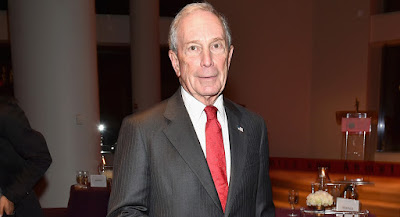 New York billionaire Michael Bloomberg has nixed his musing about launching an independent bid for the White House in 2016?  Why, because he feared he'd be unsuccessful and help elect Donald Trump as president - something I suspect many foresaw as a frightening possibility.  Indeed, a Bloomberg candidacy would have likely siphoned off votes from Hillary Clinton and might have allowed Trump to win with significantly less than a majority of votes.  Politico looks at Bloomberg's decision which is likely triggering sighs of relief at the Clinton campaign and among those who find a Trump or Cruz presidency as too frightening to contemplate.  Here are article excerpts:

Apparently there are limits to what money can buy.  For a moment, Mike Bloomberg’s presidential campaign looked like a go. But the numbers weren’t adding up. After a grim meeting with his advisers Friday, and a weekend to lay the last of his long-held White House dreams to rest, the former New York City mayor told them Monday it was over.

His decision not to run was a reality check in an election cycle that’s become a reality show: if a viable candidate with $40 billion and nothing but his ego and reputation to lose can’t find a path in one of the most tumultuous election cycles ever, a real third party presidential campaign might be an impossibility.

In Bloomberg’s case, he concluded that he’d lose on Election Day -- or lose later in the House of Representatives. Either way, he decided, it would probably put Donald Trump in the Oval Office.

“Clinton-Trump-Bloomberg changed that dynamic,” Wolfson said. “What our data showed was that the high water mark for us in that scenario was victory in states but not nearly enough to get to 270, but more than enough to throw it into the House of Representatives.”

They even considered what Antonin Scalia’s death and a 4-4 Supreme Court might mean.

“It only solidified in his mind that if the only path required a constitutional crisis, that probably wasn’t the best way to go,” said the person familiar with the planning.

The data Bloomberg’s team put together showed that any path would kill Clinton and leave the Republican nominee largely untouched—even if that Republican was Trump. Clinton has extremely high negative numbers they found, but also extremely high loyalty among Democrats. Bloomberg would win states in three-way races, and turn them green on pollster Doug Schoen’s projected map, but they were all blue states. The red states stayed red, no matter how much money they figured they’d pump into pushing Bloomberg’s message and biography as the centrist independent businessman who gets things done but couldn’t be bought.