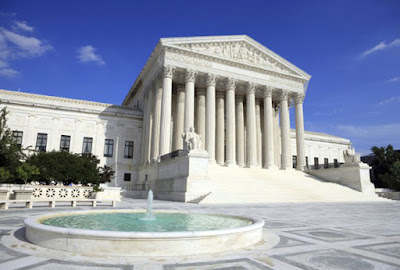 As regular readers know, I was never a fan of Antonin Scalia and, in fact, on more than one occasion opined that he needed to be removed from the U.S. Supreme Court because of his inability to put aside his own religious, racial and male chauvinist prejudices when confronted with cases.  Nature - or God, if one is a Christofascist - stepped in and Scalia was removed from the Court in a manner I had not contemplated.  Now, if only Clarence Thomas would be removed, we might begin to see a Court with mostly responsible justices (Alito remains a boil on the Court, but might come around if sufficiently isolated).  A piece in Slate looks at how the passing of one bigot and opponent of modernity has changed the Court - most likely for the better, especially  if the Republicans fail to win the White House.  Here are column highlights:

Nobody quite knows what to make of it yet, but nobody disputes it, either: The Supreme Court of March looks nothing like the court we knew in February. The loss of a single justice, Antonin Scalia, has blown up the court and reshuffled everything. It’s the early days yet, and much of the evidence of newish, liberalish outcomes at the court lies in routine housekeeping matters: unsigned orders and withdrawn appeals. Still, it’s safe to say the high court is no longer going to be a candy store for pro-business and socially conservative litigants. What will rise in its place is still a work in progress.

The crazy new vibe at the court isn’t even limited to the raft of orders that have come down in the past week. Those include a critical and unanimous order affirming the right of same-sex partners to adopt children and the tossing of a death penalty conviction in Louisiana because the state withheld significant exculpatory evidence.

There was also last Friday’s unsigned order allowing several abortion clinics in Louisiana to reopen their doors, following an emergency decision from the 5th U.S. Circuit Court of Appeals that would have shuttered all but one clinic in that state. In one sense, the order to keep the clinics open while the case progresses was not a massive surprise. Last June, the Supreme Court issued a similar last-minute stay of the 5th Circuit’s Whole Woman’s Health decision that would have closed a significant number of clinics in Texas. . . . .   in choosing to reinstate the Louisiana abortion rules, the 5th Circuit brushed aside the fact that the Supreme Court had prevented Texas’ clinics from closing last June. Faced with the snub, the court tartly reminded the 5th Circuit that keeping the Louisiana clinics open is “consistent with the Court’s action granting a stay in Whole Woman’s Health v. Cole.” In other words, says the Supreme Court to Louisiana, “We may be 4–4 now, but we are still here. Thank you.”

This week, the Wall Street Journal’s Jess Bravin also noted that a new alliance seems to have cropped up between the court’s two most conservative members, Thomas and Justice Samuel Alito. The emerging split between these two determined conservatives and their colleagues might be in reaction, writes Bravin, to Chief Justice John Roberts “apparently seeking consensus where he can on a court hobbled by potential 4-4 ideological splits.” By contrast, Thomas and Alito seem to be redoubling their efforts to form a bulwark against “the path set out by their six colleagues.” . . . . . The two conservatives also aligned in an effort to uphold the right of states to sentence juveniles to life in prison without parole.

But changes at the court itself are only half of it. There’s also a growing sense among conservative interest groups and litigation shops that the good times and rich bounty of the old Roberts court are no longer on offer and that it may be better to cut and run than stick around and lose.

[T]he sudden frailty of the conservative bloc and the almost giddily emboldened left reveal how high the stakes will be in the general election. These past few weeks have proved to the right that its fears about the post-Scalia court are justified and tantalized the left with promises of a golden era with Ruth Bader Ginsburg tossing thunderbolts around from on high. Even as it tries to speak softly and subtly this month, the court reveals just how much now hangs in the balance.
Posted by Michael-in-Norfolk at Saturday, March 12, 2016