Tampa Bay Times: Marco Rubio Not Ready to be President 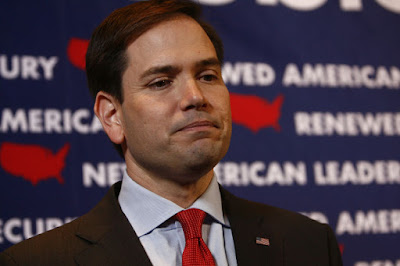 With the preliminary results in from the Mississippi and Michigan GOP primaries showing Rubio not even in 3rd place, the Florida primary next week is all the more crucial if one is to believe any of Marco Rubio's claims that he is positioned for a "come back."  Yet, what is one seeing?  One South Florida newspaper opted to endorse no one.  In the case of the Tampa Bay Times, today's editorial is a scathing denunciation of Marco Rubio who is labeled as "not ready to be president."  Indeed, the take away is that Rubio is an empty suit with few accomplishments.  One cannot help but wonder what so many in the GOP establishment saw him other than the fact that he isn't Donald Trump or Ted Cruz.  Here are highlights:

Vote for me to stop Donald Trump. That is Sen. Marco Rubio's message to Florida voters this week as the Republican establishment desperately tries to prevent the billionaire from winning the Republican nomination for president and completing a hostile takeover of the party. It's a weak argument from a weak candidate who is not prepared to be president.

Throughout his political career, Rubio has focused on promoting himself and preparing for his next move rather than providing leadership to effectively address the challenges of the moment. Relying on a charming personality and a smooth speaking style, he has been more talk than action, more gimmick than substance, more opportunist than committed public servant. The result is a thin resume, a reputation for failing to pay attention to detail and a tendency to bend when the political winds shift.

[O]ther highlights of Rubio's time in Tallahassee. It was while he was House speaker that Rep. Ray Sansom inserted $6 million into the state budget for a community college building that was really an airport hangar sought by a friend. It was Rubio who made it a priority for his friends on the state appellate court to get the $48 million "Taj Mahal" courthouse in Tallahassee. It was Rubio who charged thousands of dollars to his Republican Party credit card for personal expenses such as repairs to the family minivan that he says he repaid. So much for the fiscal responsibility Rubio likes to preach.

Let's remember that Rubio's single term in the U.S. Senate has been devoid of a single significant accomplishment, unless we count a successful sneak attack on a small portion of the Affordable Care Act. He rose to national prominence as a key member of a bipartisan group of senators who passed sweeping immigration reform. True to form, Rubio abandoned it when the heat was turned up by opponents, and he has spent much of this campaign trying to explain himself without satisfying anyone.

Rubio is a leader in Washington in one respect: He has missed more votes than any other senator in the past 12 months. . . . . The best argument for a promotion is a stellar performance in the current job, and Rubio fails that test.

One of this year's ironies is that the anti-establishment Republican voters whom Rubio relied upon to win the U.S. Senate race in 2010 have abandoned him. The 2016 version of the tea party wave is angrier, more disillusioned and wider. Rubio, who has spent his career plotting his next move and exploiting opportunities rather than building a strong record and a natural constituency, has no viable way forward absent a Florida miracle.

A vote for Rubio may be a protest vote — but it won't be a vote for someone who is prepared to be president.