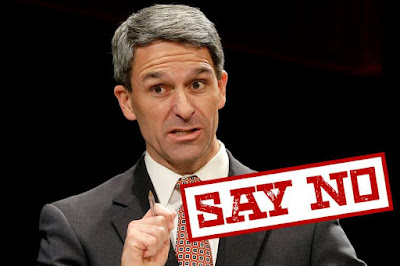 As an attorney for over 35 years I can think of few people less suited for the Virginia Supreme Court than gay hating religious zealot, anti-immigrant bigot and climate change denier, Ken "Kookinelli" Cuccinelli.  Yet that is exactly who a Republican controlled committee nominated to the Virginia Supreme Court in an apparent effort to make Virginia a national and international laughing stock akin to Alabama. Moreover, Cuccinelli strikes me as totally incapable of meeting the standards of the Canons of Judicial Conduct which require a judge or justice to be unbiased towards issues and litigants before their court.  No gay Virginian, no environmentalist, and many others could not possible expect to be treated in an unbiased way by Kookinelli.  Multiple organizations are mobilizing to facilitate sane Virginians in sending a message to their state Senators that Cuccinelli is absolutely unacceptable.  Equality Virginia has a page here to send a message, to state senators but many others have similar links to stop this travesty.  The Virginian Pilot has details on this utterly insane and inappropriate nomination.  Here are highlights:

Some Republicans in the General Assembly are discussing the idea of electing former Attorney General Ken Cuccinelli to the Supreme Court of Virginia.

House and Senate Republican leaders have said they want to elect Appeals Court Judge Rossie Alston to the high court. There are plenty of votes to do that in the GOP-dominated House, but Republicans are one vote shy in the Senate, leading to an impasse.

Should they be unable to elect Alston, two lawmakers said, Republicans would discuss other candidates and Cuccinelli’s name is in the mix. Also among those that have been mentioned: Court of Appeals Judges Stephen R. McCullough and Mary Grace O’Brien.

Most lawmakers are staying quiet about the situation because reaching 21 votes on the judicial election in the Senate has been a challenge and there’s uncertainty over what will happen.

House and Senate Republican leaders later said McAuliffe did not properly consult them, and since it was the duty of the General Assembly to elect judges, they preferred Alston and would elect him.

Cuccinelli is an ardent foe of abortion and gay marriage, and as attorney general questioned the science behind global warming.

I find Cuccinelli nothing short of frightening.  In addition, in my opinion, he is also a closeted self-loathing gay man who clings to strident religious dogma and lashing out at other gays as a way to deal with his own raging internalized homophobia.   The man needs a mental health intervention, not an appointment to the Virginia Supreme Court.   PLEASE contact you state Senator and urge them to vote "No" to Cuccinelli.
Posted by Michael-in-Norfolk at Tuesday, March 08, 2016