Why Hillary Not Likely to Be Indicted in E-Mail Flap 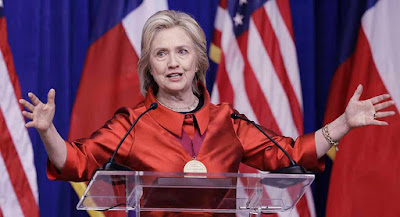 While the Republican establishment remains distraught and plotting over how to sabotage Donald Trump's possible nomination win, they remain near orgasmic over dreams that Hillary Clinton will be indicted over her use of a private e-mail server while Secretary of State - something we have since learned her predecessors did as well - thus throwing the Democrat side of the election process into chaos.  A column in the Washington Post looks at why this Republican wet dream is unlikely to happen.  Here are excerpts:


For those of you salivating — or trembling — at the thought of Hillary Clinton being clapped in handcuffs as she prepares to deliver her acceptance speech at the Democratic convention this summer: deep, cleansing breath. Based on the available facts and the relevant precedents, criminal prosecution of Clinton for mishandling classified information in her emails is extraordinarily unlikely.

My exasperation with Clinton’s use of a private email server while secretary of state is long-standing and unabated. Lucky for her, political idiocy is not criminal.

There are plenty of unattractive facts but not a lot of clear evidence of criminality, and we tend to forget the distinction,” American University law professor Stephen Vladeck, an expert on prosecutions involving classified information, told me. “This is really just a political firestorm, not a criminal case.”

Could a clever law student fit the fact pattern into a criminal violation? Sure. Would a responsible federal prosecutor pursue it? Hardly — absent new evidence, based on my conversations with experts in such prosecutions.

There are two main statutory hooks. Title 18, Section 1924, a misdemeanor, makes it a crime for a government employee to “knowingly remove” classified information “without authority and with the intent to retain such documents or materials at an unauthorized location.” Prosecutors used this provision in securing a guilty plea from former CIA director David H. Petraeus, who was sentenced to probation and fined $100,000. But there are key differences between Petraeus and Clinton.

Petraeus clearly knew the material he provided to Paula Broadwell was classified and that she was not authorized to view it. “Highly classified . . . code word stuff in there,” he told her. He lied to FBI agents, the kind of behavior that tends to inflame prosecutors.

In Clinton’s case, by contrast, there is no clear evidence that Clinton knew (or even should have known) that the material in her emails was classified. Second, it is debatable whether her use of the private server constituted removal or retention of material.

Another possible prosecutorial avenue involves the Espionage Act. Section 793(d) makes it a felony if a person entrusted with “information relating to the national defense” “willfully communicates, delivers [or] transmits” it to an unauthorized person. That might be a stretch given the “willfully” requirement.

Section 793(f) covers a person with access to “national defense” information who through “gross negligence permits the same to be removed from its proper place of custody or delivered to anyone in violation of his trust.”

The argument here would be that Clinton engaged in such “gross negligence” by transferring information she knew or should have known was classified from its “proper place” onto her private server, or by sharing it with someone not authorized to receive it. Yet, as the Supreme Court has said, “gross negligence” is a “nebulous” term. Especially in the criminal context, it would seem to require conduct more like throwing classified materials into a Dumpster than putting them on a private server that presumably had security protections.

My point here isn’t to praise Clinton’s conduct. She shouldn’t have been using the private server for official business in the first place. It’s certainly possible she was cavalier about discussing classified material on it; that would be disturbing but she wouldn’t be alone, especially given rampant over-classification.

The handling of the emails is an entirely legitimate subject for FBI investigation. That’s a far cry from an indictable offense.
Posted by Michael-in-Norfolk at Wednesday, March 09, 2016