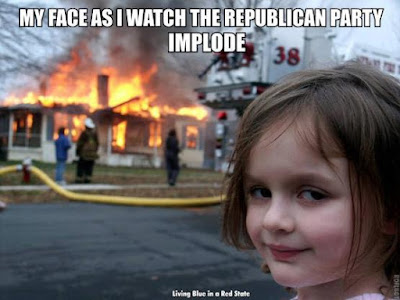 But for the danger posed to the country, the hand wringing among Republicans over the Party's descent into insanity and the rise of Donald Trump might be almost humorous.  Certainly well deserved misfortune.  A piece in The Daily Beast joins the chorus of those lamenting the situation and proposing a means to block a Trump nomination.  The piece which equates the GOP with European powers bumbling their way into World War I fails, however, to concede that the current state of affairs was self-created and is the result of years of pandering to lunatics and extremists, not some chance mistake.  Here are column highlights:.


These are, as the Chinese curse goes, interesting times. In a Republican presidential debate, the leading candidate defends the size of his penis and attacks the Constitution, asserting that he will order the U.S. military to commit war crimes. A few days earlier the same candidate said on national television that he had to “do research” on the KKK, David Duke, and white supremacism before he could take a position. During the week, the frontrunner threatened Jeff Bezos, owner of The Washington Post, because the Post had dared write articles he thought critical. “And believe me, if I become president,” Trump said, “oh, do they have problems. They’re going to have such problems.”

How did this happen?

It’s everyone’s fault and no one’s fault. There were some who welcomed Trump onto the presidential scene, confident that he could help scold an out-of-touch establishment slow to grasp the problems of a troubled America. In a July 2015 Politico piece, National Review editor Rich Lowry wrote that Trump had hit “on an important truth that typical politicians either don’t know or simply fear to speak. “When Mexico sends its people,” Trump said, “they’re not sending their best.” That’s obviously true,” wrote Lowry who compared him to “Herman Cain squared—an early-nominating-season phenomenon with a massive media megaphone.”

By January, Lowry’s magazine was dedicating an entire issue to the urgency of stopping the threat of Trump, who “would destroy the conservative movement.” And I was just as wrong, if not more so. I wrote that facing a loss in Iowa, Trump’s ego would tilt him toward leaving the stage before being proven a loser. Wrong, wrong, wrong.

For various reasons, the Republican candidates have enabled Trump’s rise, slow to launch a concerted attack, largely giving him a clear path. Each candidate seemed more obsessed with this currently popular but insane notion of winning a “lane” rather than winning a race, while Trump was focused on winning a race.

Logic dictates that the remaining candidates should focus on holding Trump as far below 1,237 as possible, with the goal of pushing the convention to a second ballot. While some speculate a second ballot might be a scenario for a new candidate like Mitt Romney or Paul Ryan to enter the race, that strikes me as unlikely. The far more plausible outcome would find two candidates joining together to form a ticket, pooling delegates to get over 1,237.

There are rules for securing the nomination, and as long as the rules are adhered to, the game has been played fairly. In 1976, the great conservative Ronald Reagan took his fight to the convention and came within one delegation (Mississippi’s) of defeating a sitting Republican president, Jerry Ford. Surely if a convention strategy is good enough to challenge a Republican president, it’s good enough to challenge a major Clinton donor like Donald Trump.

As the process moves into a slate of winner-take-all states, the key to the convention strategy—call it the Reagan Strategy, not the brokered convention strategy—is for Rubio and Kasich to win their home states. But in what strikes me as a bizarre move, Ted Cruz is moving resources to Florida and attacking Marco Rubio on the air. Why? Does Cruz think he can win Florida? It seems the longest of shots. Much more likely is that he helps hand the state to Donald Trump. That will all but finish any chance Cruz has of becoming the Republican nominee.

So the madness and miscalculation apparently continues. The Republican Party is lurching toward the Somme, where death and destruction will replace hopes for a November victory. Dig your trench. Get your gas mask. The boys aren’t going to be home by Christmas.
Posted by Michael-in-Norfolk at Tuesday, March 08, 2016