The imploding Campaign of Marco Rubio 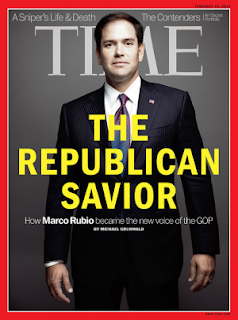 Given the implosion of his campaign and disastrous performance in the last round of Republican primaries/caucuses, it is ironic that Marco Rubio, a/k/a Marcobot, for a time was seen as potentially the biggest threat to Hillary Clinton.  As has so often has happened in this campaign cycle, pundits and members of the GOP establishment must be asking themselves WTF was I thinking.  At least one article in the Washington Post tracks the full on implosion of Marcobot to his decision to engage in childish insults and immature behavior in attacking Donald Trump which proved that Rubio is anything but presidential material.   Here are highlights:

Marco Rubio had suffered three electoral thumpings in a row when the senator from Florida and his image-makers abruptly shifted strategy. The aspirational candidate, whose presidential campaign was built on a promise of generational change and Republican unity, would morph overnight into Donald Trump’s chief assailant.

Rubio launched what he and his team felt was an imperative assault on the front-runner at the Houston debate on Feb. 25. The next morning at a Dallas rally, he mocked Trump mercilessly. Rubio whipped out his iPhone and, with boyish glee, read aloud the billionaire mogul’s misspelled tweets. He made fun of Trump’s makeup and “sweat mustache,” and suggested the mogul had wet his pants.

For the next three days, Rubio’s crude schoolyard taunts continued: over Trump’s made-in-China suits, his “horrible spray tan” and his small hands — a quip that, as Trump would later explain on the debate stage in Detroit, implied something else was small, too.

Rubio’s benefactors were aghast to see their candidate practicing Trump’s gutter politics. “Everyone went, ‘What?. . . Why are you going down to that level?’ ” recalled one fundraiser, who spoke on the condition of anonymity to talk candidly. “You might as well support Trump.”

Looking back, Rubio’s supporters see these fateful days as central to his unraveling. A strategy designed to get under Trump’s skin and force him on the defensive instead backfired on Rubio, diminishing the 44-year-old senator who had spent years trying to demonstrate presidential gravitas. At rally after rally, Rubio was unintentionally personifying the caricature that Trump was perpetually drawing of him: “Little Marco.”

The results were not pretty. Rubio lost 18 of the next 20 contests,  . . . The ultimate humiliation came on Tuesday, when Rubio performed so poorly in four states — he got just 5 percent in Mississippi — that he was shut out from gaining any delegates.

A  cloud of fatalism now hovers over his campaign. Aides on Wednesday tried to beat back rumors he would quit the race — perhaps before Thursday’s CNN debate in Miami. Donors exchanged grim messages about Rubio’s fate in Florida, where his campaign, short on cash, is running no advertisements. New polls showed him trailing Trump here badly.

Supporters in the small and subdued Hialeah crowd all but conceded defeat. “I’ve been around for a long time,” said Sal Pittelli, 70. “And you can smell the flop sweat.

Rubio’s backers on Capitol Hill tried to show a united front of optimism amid the negative chatter. . . . . Other Rubio associates were downright despondent. They were reticent to speak openly because they did not want to damage their friend’s prospects, but one confessed privately, “I don’t see how this campaign continues.”

There are a multitude of reasons to account for Rubio’s collapse: . . . .  another reason is that Rubio has no natural base. In the sprawling field, he was never the most experienced establishment-friendly candidate (that was Bush), nor the most conservative ideological warrior (Cruz), nor the rebellious outsider (Trump).

I can't feel much sympathy for Rubio who has demonstrated that he will say and do anything in an effort to win and to pander to the ugliest elements of the GOP base.  Perhaps Marcobot needs to go back to dancing at foam parties in gay clubs.  He might be more believable.