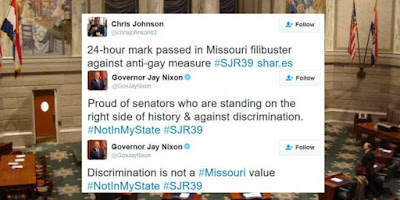 At times it seems as if self-prostituting Republicans are in a contest across the country to see who can most debase themselves to Christian extremists and undermine non-discrimination protections for LGBT citizens.  Here in Virginia we have seen the Republicans in the House of Delegates introduce a plethora of anti-gay bills, most of which have thankfully been tabled and/or face a veto by Democrat Governor Terry McAuliffe.  In Missouri, similar efforts are embodied by a GOP effort to write discrimination into the state constitution and grant special rights to Christian extremists.  Thankfully,  the Democrat minority in the state Senate have launched a filibuster (it's gone for over 26 hours so far) to block a vote on the foul effort.  The Democrat effort has prompted many Twitter posts that can be viewed here.  Here are highlights from the St. Louis Post-Dispatch on other aspects of the filibuster effort:

A proposal by Sen. Bob Onder, R-Lake Saint Louis [Senate Joint Resolution 39], is designed to protect wedding vendors and clergy from legal liability and government penalties if they decline to participate in same-sex marriage ceremonies.

Proponents say churches in other states have had their tax-exempt statuses threatened. They've also used an example from Oregon, where a baker was ordered to pay damages for declining to bake for a same-sex wedding, as a reason for why the amendment is needed.

But Democrats charge that clergy are already protected under the First Amendment, and that the proposal does little more than codify discrimination against gays in the state constitution.

So shortly after 4 p.m. Monday, the Democratic minority launched a filibuster to stall the bill. As of 4 p.m. Tuesday, the bill had yet to come to a vote. Meanwhile, the debate has drawn nationwide attention from news outlets and social media.

Companies and at least one business group have also voiced opposition. Last week, PROMO, an LGBT advocacy group, published a letter with 185 Missouri businesses, churches and other groups voicing opposition.

Creve Coeur-based Monsanto also came out against the measure Tuesday.  "Monsanto has a long history of employing a diverse workforce and creating an inclusive environment for our employees," its statement reads, in part. "Monsanto is calling on other businesses and the agricultural community to join the company in speaking out against discrimination here in our home state of Missouri and around the world."


Once again, I ask myself "why would any LBGT individual support GOP candidates?"