How Gay-Friendly Are the Presidential Candidates? 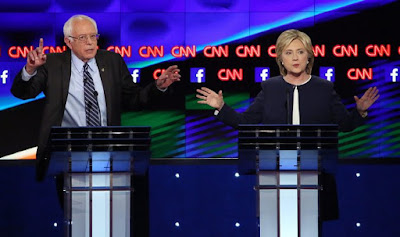 With the Republican Party still using LGBT Americans as whipping boys (and whipping girls) and doing everything possible to grant special rights to gay-hating Christians, who wins the White House becomes a very important question, particularly since a Supreme Court with more right wing justices could impede progress in gay rights, if not reverse ground that has been won to date.  While I am not a single issue voter, it is hard to ignore the menace that today's Republicans pose to not only myself, but also to my spouse, friends and family members.  Other racial and religious minorities should be similarly frightened.   A piece in Huffington Post from Second City looks at the six leading candidates for the presidency and ranks their gay-friendliness.  Yes, the piece is satire, but ultimately it hits the target on evaluating those candidates who are friends and foes to the LGBT community (surprise, the only friends are the Democrats).  Here are excerpts:


[W]e must evaluate each candidate's flits and specks of gayness.

Candidate: Bernie Sanders
Why He's Gay: Sanders has most likely rested his little old man head at literally thousands of cozy Vermont B&Bs owned by stout, older lesbian couples who are both named Wendy.
Why He's Not: Probably thinks 2(X)IST is a section on your W9; knows exactly 0 percent of the lyrics to Jess Glynne's "Hold My Hand."
Gay-Friendliness: V High
While Sanders didn't officially support gay marriage until 2009 (relatively late in the game, considering that gay humans have been around for literally millions of years), he has consistently voted and spoken out against anti-gay agendas his entire career.
·        Signed a Gay Pride Day declaration in 1983 when he was mayor of Burlington (the town, not the coat factory)
·       * Voted against DOMA (Defense of Marriage Act) in 1996
·        *Opposed Don't Ask Don't Tell from its onset
·       *After hearing a Republican use the phrase "homos in the military" out loud in public inside the House of Representatives, shot back with, "You have insulted thousands of men and women who have put their lives on the line."
Overall Gay Rating: PFLAG Dad

Candidate: Hillary Clinton
Why She's Gay: Her "Let's-All-Go-to-the-Lesbian-Gala" power suits; possesses perfect Disney villainess credentials -- an aspirational, self-employed, strong woman in a misogynistic world leading a faithful army of minions to foil young, idealistic lovers.
Why She's Not: Though she is filled with camp value, Clinton's record hasn't exactly been death drop-worthy.
·        Spent more than 20 years on the "One Man, One Woman" soapbox
·        Supported her husband's Don't Ask Don't Tell policy
·        Stated her position as being "very positive about civil unions" during a 2007 debate
·        Went radio silent HBO cancelled Looking in 2015
Gay-Friendliness: Very High/Whatever It Needs to Be to Get Elected, Why Won't You Just Love Me, Goddamnit? I Have A Lot Of Good Qualities, People
*Beginning in 2013 or so -- what's in the past is in the past, the point is, SHE EVOLVED -- Clinton's cadre of campaign advisors carefully measured the pros and cons of being pro-gay and decided to encode Hillary Version 9.06 Beta with measuredly evolved pro-gay software.
·      * Now fully supports gay marriage, and on the day everyone made their Facebook profile pictures all rainbow-y, she tweeted, "Every loving couple & family deserves to be recognized & treated equally under the law across our nation. #LoveMustWin #LoveCantWait."
·      *  Supported the Equality Act of 2015
·     *   In favor of amending the records of the 14,000 servicemen and women who were forced to leave the armed services because they were gay under her husband's Don't Ask Don't Tell to reflect an honorable discharge.
·      *  Endorsed by the Human Rights Campaign
Overall Gay Rating: Jane Lynch from Best In Show

Candidate: John Kasich
Why He's Gay: Flaunting the hair of an older lesbian who has been in this line too long, Kasich has attended at least one gay wedding and says he would love a gay son or daughter.
Why He's Not: Kasich looks and acts like every divorced, single dad in the throes of a mid-life crisis -- the one who starts dating a college student with two first names, like Amber Lynne.
Gay Friendliness: Not the Worst Ever, But Far from Acceptable; You Know, Like Cleveland
·        Voted for DOMA
·        Did not support same sex marriage in Ohio
·        Accepts the Supreme Court ruling, even if he doesn't agree with it, like a good Conservative Dad
·        Prevented same sex couples from getting birth certificates for their kids
Overall Gay Rating: Mary Cheney

Candidate: Donald Trump
Why He's Gay: [Sound of 1000 supercomputers exploding trying to comprehend the question]
Why He's Not: Trump represents the straight, male id in ways that Rush Limbaugh could only dream. Every failing of the over-egoed, over-buttered, over-Umbro'ed "Big Dog Gotta Hunt" American male is on display whenever he opens its hateful flesh slit.
Gay-Friendliness: Um, Low
·        Thinks gays shouldn't be discriminated against at work, but also he now seems to like the idea of FADA, stating, "If Congress considers the First Amendment Defense Act a priority, then I will do all I can to make sure it comes to my desk for signatures and enactment."
·        Vowing to nominate Supreme Court Justices that will overturn the current gay marriage ruling, so get ready for the Honorable Houston Hooters Waitress and Bristol Palin
·        On the upside, you know he's encouraged countless pairs of quietly crying, naked young women to go ahead, kiss each other.
Overall Gay Rating: A Handjob from a Tacky Russian Heiress with 17-Inch Nails

Candidate: Marco Rubio
Why He's Gay: Rubio maybe possibly was at a gay foam party in the 1990s...or so the Internet says. He drinks water like he's perpetually on Molly, plus his name sounds like a party bottom porn star from the 90s who mostly starred in ranch porns produced by Catalina Video.
Why He's Not: Clearly, Rubio doesn't douche before he bottoms, because everything that comes out of him is covered in shit.
Gay Friendliness: Basement Level
·        Doesn't want gays to adopt, once saying homeless, disadvantaged kids "shouldn't be forced to be part of a social experiment."
·        Supports FADA, that b.s. that allows bakeries to deny fondant to same sex couples
·        Does not support gay workplace non-discrimination act ENDA (Employment Non-Discrimination Act)
·        Recorded robocalls for the National Organization for Marriage, because he is a roboprick
Overall Gay Rating: Could You Please Repeat That Part About Two in the Stink?

Candidate: Ted Cruz
Why He's Gay: His wife Heidi looks exactly like every pill-addled woman who realizes, two years in, that she married a gay man and thus will never be sexually satisfied for as long as she lives and is dealing with realization this through progressively more vodka.
Why He's Not: Something about his face makes me think Cruz likes boobies, in the creepiest way humanly possible to like boobies. Like, when he sees a nude mannequin in a store, he probably turns bright red, snickers and says "boooooobies" while sweating furiously from the chin.
Basically, if it doesn't come out in a couple of years that Ted Cruz breaks into morgues and sleeps with women's corpses and slowly combs their hair with a giant antique brush while repeating the words, "Such a pretty girl....such a pretty girl," I'm going to be shocked.
Gay Friendliness: Non-Existent
·        Calls gay marriage an affront to the Constitution
·      Kim Davis is basically his whatever a straight, constipated moray eel's version of a fag hag is. Inspired by her, he says he will pass something called the First Amendment Defense Act (FADA) in his first 100 days of office, which will protect religious-based discrimination of gays.
·        His face is what Charles Manson has nightmares about.
Gay Rating: Corpse Humper

An extended version appears at secondcity.com.
Posted by Michael-in-Norfolk at Friday, March 11, 2016