Trump Is Right to Blame George W. Bush for 9/11 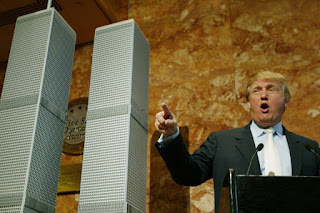 It is really frightening when I find myself agreeing with Donald Trump on anything.  I find man to be a loud mouthed egomaniac who is having a tempestuous love affair with himself.  Yet, on starting a narrative that Jebbie Bush's feckless brother George W. Bush - a/k/a the Chimperator on this blog - bears responsibility for the disastrous 9/11 attacks  - Trump is on the mark.  It's a conversation that needs to be had, especially with yet another doltish Bush seeking the White House.  A piece in The Atlantic makes the case that the Chimperator and his puppeteer Dick Cheney could have perhaps stopped the attacks had they paid attention to information in their possession.  Here are article excerpts:

Former Bush flack Ari Fleischer called Trump a 9/11 “truther.” Even Stephanie Ruhle, the Bloomberg anchor who asked the question, cried, “Hold on, you can’t blame George Bush for that.”

Oh yes, you can. There’s no way of knowing for sure if Bush could have stopped the September 11 attacks. But that’s not the right question. The right question is: Did Bush do everything he could reasonably have to stop them, given what he knew at the time? And he didn’t. It’s not even close.

When the Bush administration took office in January 2001, CIA Director George Tenet and National Security Council counterterrorism “czar” Richard Clarke both warned its incoming officials that al-Qaeda represented a grave threat. During a transition briefing early that month at Blair House, according to Bob Woodward’s Bush at War, Tenet and his deputy James Pavitt listed Osama bin Laden as one of America’s three most serious national-security challenges. That same month, Clarke presented National Security Adviser Condoleezza Rice with a plan he had been working on since al-Qaeda’s attack on the USS Cole the previous October. It called for freezing the network’s assets, closing affiliated charities, funneling money to the governments of Uzbekistan, the Philippines and Yemen to fight al-Qaeda cells in their country, initiating air strikes and covert operations against al-Qaeda sites in Afghanistan, and dramatically increasing aid to the Northern Alliance, which was battling al-Qaeda and the Taliban there.

But both Clarke and Tenet grew deeply frustrated by the way top Bush officials responded. Clarke recounts that when he briefed Rice about al-Qaeda, “her facial expression gave me the impression that she had never heard the term before.” On January 25, Clarke sent Rice a memo declaring that, “we urgently need…a Principals [Cabinet] level review on the al Qida [sic] network.”

During that same time period, the CIA was raising alarms too. According to Kurt Eichenwald, a former New York Times reporter given access to the Daily Briefs prepared by the intelligence agencies for President Bush in the spring and summer of 2001, the CIA told the White House by May 1 that “a group presently in the United States” was planning a terrorist attack. On June 22, the Daily Brief warned that al-Qaeda strikes might be “imminent.”

But the same Defense Department officials who discounted Clarke’s warnings pushed back against the CIA’s. According to Eichenwald’s sources, “the neoconservative leaders who had recently assumed power at the Pentagon were warning the White House that the C.I.A. had been fooled . . .

The following day [July 30], the CIA included in its Daily Brief an article entitled “Bin Laden Threats Are Real.” On July 1, the Brief predicted that an attack “will occur soon.”Then, on July 10, Tenet and CIA counterterrorism head Cofer Black held an emergency meeting with Rice to push for action against Bin Laden. But according to Woodward’s State of Denial, “both felt they were not getting through to Rice.”

The warnings continued. On July 11, the CIA sent word to the White House that a Chechen with links to al-Qaeda had warned that something big was coming. On July 24, the Daily Brief said the expected al-Qaeda attack had been postponed but was still being planned. Finally, on August 6, the CIA titled its Daily Brief: “Bin Ladin Determined to Strike the US.” The briefing didn’t mention a specific date or target, but it did mention the possibility of attack in New York and mentioned that the terrorists might hijack airplanes.

[I]t was the 36th time the CIA had raised al-Qaeda with President Bush since he took office.

On the morning of September 11, 2001, Clarke’s anti-al-Qaeda plan was sitting on Bush’s desk, awaiting his signature. It was the ninth National Security Presidential Directive of his presidency.
Would the Bush administration have stopped the 9/11 attacks had it taken the threat more seriously? Possibly.

On August 16, FBI and INS agents in Minnesota arrested another potential hijacker, Zacarias Moussaoui, after being tipped off by his flight instructor. But despite numerous requests, they were denied permission to search his apartment or laptop. These incidents “might have exposed the” 9/11 plot, writes Eichenwald, “had the government been on high alert.”

Four Americans died in Benghazi.  Far more than 3,000 died on 9/11.  If the House Republicans want to hold hearings on terror attacks, they need to reopen an investigation of how Bush/Cheney failed to keep America safe - not to mention launched a war based on deliberate lies that took thousands of more American lives.