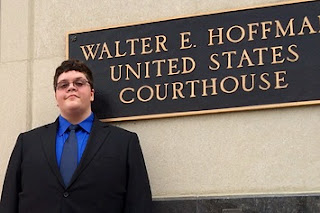 Sadly, here in Virginia finding judges who are not homophobes can be a challenge.   At the state level, the Canons of Judicial Conduct require judges who cannot be impartial toward LGBT litigants to recuse themselves from the case yet thus almost never happens as I discovered in my own divorce case where the judge over the case admitted in writing that he view sexual orientation as a choice.  Despite such bigotry and ignorance, he failed to remove himself from the case.  Now, we are seeing the same kind of prejudice in the judge overseeing the litigation on behalf of 16-year-old Gavin Grimm (pictured above, who I know and who is amazing) who has sued the Gloucester County schools over anti-transgender restroom use bigotry.  Through statements, U.S. District Judge Robert Doumar has shown his bias and rejection of modern knowledge in favor of ignorant religious inspired ignorance.  In short, he needs to be removed from the case.  Fredericksburg.com has details.  Here are highlights:


A judge who repeatedly referred to a transgender student’s “mental disorder” should be removed from presiding over the teenager’s lawsuit challenging a policy that bars him from using the boys’ restrooms at his high school, his attorneys said in court papers Wednesday.

Attorneys for 16-year-old Gavin Grimm also said U.S. District Judge Robert Doumar of Norfolk has made statements indicating he may be suspicious of modern medical science regarding gender identity and that he objected to lawyers publicizing their client’s transgender status.


Grimm’s lawyers asked for a new judge in a 58-page brief asking the 4th U.S. Circuit Court of Appeals to reverse two key rulings in the case. Doumar refused to grant a preliminary injunction that would have allowed Grimm to use the boys’ bathrooms when the new school year started in September, and he threw out a claim that the policy violates federal sex discrimination law. He has not yet ruled on Grimm’s claim that the policy violates the U.S. Constitution’s equal protection clause.

The Gloucester High School junior, who was born female but identifies as male, filed the lawsuit after the school board adopted a policy requiring him to use either the girls’ restrooms or one of several single-stall unisex restrooms available to all students. He claims the policy is stigmatizing and discriminatory.

They cited Doumar’s support for the idea that allowing Grimm to use the boys’ restroom could lead to “mating.” Doumar said medical science shows that “the brain only has two instincts. One is called self-preservation, and the other is procreation.”

The attorneys wrote that the American Psychiatric Association says gender dysphoria should not described as a disorder “because that terminology improperly stigmatizes transgender people,” yet Doumar persisted in using the term. That “gratuitous labeling ... does not reflect the sensitivity or care the public should expect from courts addressing these issues,” the lawyers said.

The embrace of ignorance and religious belief have no place in the civil lor on the bench.
Posted by Michael-in-Norfolk at Thursday, October 22, 2015