How the CIA, George W. Bush and Others Create ISIS 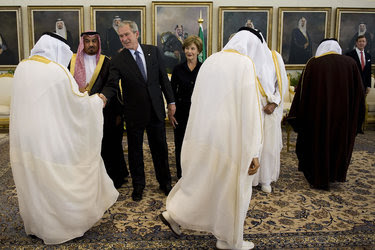 To hear Republicans the ongoing debacle in the Middle East is all Barack Obama's fault.  Like so much of what the GOP noise machine puts out nowadays, these claims bear no resemblance to the truth.  Moreover, just as George W. Bush and Emperor Palpatine Cheney were caught completely at the wheel by the 9-11 attackes, George W. Bush and his evil minion - or is puppeteer more accurate? - bear responsibility for the rise of ISIS.  Rather than missteps by Obama, it was the failed Middle East polices of Bush/Cheney that are to blame for the current unfolding disaster. But, again, when do truth and reality mean nothing to today's Congressional Republicans.  A piece in Salon looks at the those truly at fault in the creation of ISIS.  Here are excerpts:

Since 1980, the United States has intervened in the affairs of fourteen Muslim countries, at worst invading or bombing them. They are (in chronological order) Iran, Libya, Lebanon, Kuwait, Iraq, Somalia, Bosnia, Saudi Arabia, Afghanistan, Sudan, Kosovo, Yemen, Pakistan, and now Syria. Latterly these efforts have been in the name of the War on Terror and the attempt to curb Islamic extremism.

Yet for centuries Western countries have sought to harness the power of radical Islam to serve the interests of their own foreign policy. In the case of Britain, this dates back to the days of the Ottoman Empire; in more recent times, the US/UK alliance first courted, then turned against, Islamists in Afghanistan, Iraq, Libya, and Syria.

The Turkish Ottoman Empire was, for centuries, the largest Muslim political entity the world has ever known . . . Britain’s support for the Ottoman Caliph—a policy known as the Eastern Question—was entirely motivated by self-interest. Initially this was so the Ottoman lands would act as a buffer against its regional imperial rivals, France and Russia. . . .

It was only with the onset of the First World War in 1914 that this 400-year-old regional paradigm unraveled. When Mehmed V sided with the Germans, Britain was reluctantly excluded from dealing with the caliphate’s catchment of over 15 million Muslims, reasoning that “whoever controlled the person of the Caliph, controlled Sunni Islam.” London decided that an Arab uprising to unseat Mehmed would enable them to reassign the role of caliph to a trusted and more malleable ally: Hussein bin Ali Hussein, the sherif of Mecca and a direct descendant, it is claimed, of the Prophet Muhammad. The British employed racism to garner support for the uprising, appealing to the Arabs’ sense of ownership over Islam, which had originated in Mecca and Medina, not among the Turks of Constantinople.

The Arab Revolt against the Ottoman Empire, fomented by the British, got underway in 1916, the same year that the infamous Sykes-Picot Agreement was made in secret, carving up between the British and French the very lands Sherif Hussein had been promised. Betrayal, manipulation, and self-interest were, and remain, the name of the game when it comes to Western meddling in the Middle East.

In a memo to British intelligence in 1916, Lawrence described the hidden agenda behind the Arab uprising: “The Arabs are even less stable than the Turks. If properly handled they would remain in a state of political mosaic, a tissue of small jealous principalities, incapable of cohesion . . . incapable of co-ordinated action against us.” In a subsequent missive he explained, “When war broke out, an urgent need to divide Islam was added. . . . Hussein was ultimately chosen because of the rift he would create in Islam. In other words, divide and rule.”

To counteract the rise of pan-Arabism, the West began to support Islamist tendencies within each country—mostly branches of the Muslim Brotherhood—and also worked hard in the diplomatic field to create strong and binding relationships with Islamic, pro-Western monarchies in Saudi Arabia, the Gulf States, and Jordan. These relationships endure to this day.

The most extreme manifestation of radical Sunni Islam was Saudi Arabia’s Wahhabism, which it had started to disseminate via a string of international organizations and its self-designated Global Islamic Mission.

For the West, radical Islam represented the best way to counter the encroachment of Arab nationalism communism.

“More than 100,000 Islamic militants were trained in Pakistan between 1986 and 1992, in camps overseen by the CIA and MI6, with the SAS training future al Qaeda and Taliban fighters in bomb-making and other black arts. Their leaders were trained at a CIA camp in Virginia.” That Western interference in Afghanistan actually precedes the Soviet invasion by several months is rarely acknowledged.

Because IS is a product of Western interference in Iraq and Syria, none of the powers that backed the Afghan mujahideen anticipated the emergence of alQaeda, with its vehemently anti-Western agenda and ambition to re-establish the caliphate. Pakistan’s President Pervez Musharraf wrote in his autobiography, “Neither Pakistan nor the US realized what Osama bin Laden would do with the organization we had all allowed him to establish.”

In the course of the 1990s, radical political Islam became more extremist—a shift that was encouraged and funded by Saudi Arabia. . . . The House of Saud now linked its survival with the rise of the Salafi-jihadist tendency, which was consistent with its own custom-fit Wahhabi ideology.

Saudi entities and individuals funded al Qaeda and other violent Salafist groups to the tune of $300 million through the 1990s, and the United States and UK remained stalwartly supportive.

The First Gulf War brought two changes into play. The first was that Saudi Arabia now became completely dependent, militarily, on the United States for its survival. The second was that, in an attempt to weaken Saddam Hussein, the CIA encouraged Shi‘i groups in southern Iraq to rebel, resulting in thousands of Shi‘a being slaughtered by regime helicopter fire. George H. W. Bush spent $40 million on clandestine operations in Iraq, flying Shi‘i and Kurdish leaders to Saudi Arabia for training, and creating and funding two opposition groups . . .

The West continues to behave as if Saudi Arabia can deliver the world from the menace of extremism. Yet the kingdom has spent $50 billion promoting Wahhabism around the world, and most of the funding for al Qaeda—amounting to billions of dollars—still comes from private individuals and organizations in Saudi Arabia. The Sinjar Records (documents captured in Iraq by coalition forces in 2007) provided a clear picture of where foreign jihadists were coming from: Saudi nationals accounted for 45 percent of foreign fighters in Iraq. They swell the ranks of IS today.

As noted in other posts, it is ridiculous that the USA continues to support the Saudi royals who are funding  - or allowing - the funding of ISIS and extremist groups.  Sadly, due to American and European dependence on Middle East oil, we have supported the Saudis even as they work for terror attacks against us.
Posted by Michael-in-Norfolk at Sunday, October 18, 2015