The Scary Specter of Ted Cruz 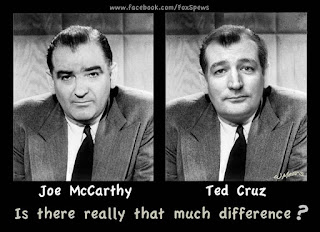 I generally view George W. Bush as a cretin who caused huge harm to America during his presidency.   But like Donald trump, once in a great while even George W. manages to be right.  In this case, it is his slamming of Ted Cruz during a fundraiser behind closed doors.  The entire GOP field of would be presidential candidates is frightening, but in Cruz we see someone who is truly frightening, if not evil.  He reminds me of another Ken Cuccinelli, man who suffers from delusions, in my opinion, and who spews hatred in order to pander to the increasingly insane Republican Party base.  Given the opportunity, I firmly believe that Cruz would become another Joe McCarthy.  What makes Cruz so dangerous is the fact that if and when Trump and the mentally disturbed Ben Carson exit from the GOP clown car, Cruz could become the fallback candidate for the ugliest elements of the GOP base.  A column in the New York Times looks at the prospect.  Here are highlights:

Since leaving the White House, George W. Bush has taken pains not to insert himself into the events of the day. Not to weigh in. Not to utter statements bound to become headlines.   When he breaks that habit, you perk up and wonder why.

He broke it in regard to Ted Cruz.

According to a report in Politico on Monday, Bush used his unscripted remarks at a fund-raiser for his brother Jeb over the weekend to make clear that among Jeb’s rivals for the Republican nomination, one in particular rubs him the wrong way.

He described Cruz as cynically opportunistic and self-serving. And this assessment was so starkly at odds with Bush’s anodyne, even warm, remarks about other Republican presidential candidates that listeners were stunned, wrote Politico’s Eli Stokols.

I think a great many Americans — including a majority of Cruz’s colleagues in Congress — know exactly how he feels.

But there’s no solace in his words. Quite the opposite. He wouldn’t have felt compelled to utter them if Cruz wasn’t a possible factor in the race — if he wasn’t a menacing, stalking, relentless force to watch for and run from, like the body-hopping spirit in this year’s most celebrated horror movie, “It Follows.”

In fact Bush’s remarks at the fund-raiser apparently included a heads-up about Cruz’s potency, especially in primaries across the South.

The slow torture of the Republican primary knows no limit. First Donald Trump turns it into a carnival, then Ben Carson comes along with his insanity about the Holocaust and guns. Between them they own nearly 50 percent of the Republican vote, according to recent national surveys.
Examine those polls closely and your stomach clenches tighter.


His [Cruz's] campaign has more cash on hand than that of any other Republican in the hunt. If you add “super PAC” money that’s been officially disclosed so far to the tally, he trails only Jeb and Hillary Clinton.

In a column earlier this month, I noted that alarmed Republican operatives were paying greater heed to Cruz, who seems to be positioning himself as the ultraconservative fallback — the rabble rouser in the bullpen — if angry voters rethink Trump or Carson and want an establishment-vilifying candidate with at least some government experience. Cruz is in his first term as a senator from Texas.

[H]e’s emblematic of the flamboyantly uncompromising comrades in the so-called Freedom Caucus in the House of Representatives, who similarly confuse attention with accomplishment.

Cruz doesn’t propose remedies. He performs rants. He’s not interested in collaboration or teamwork. His main use for other politicians, even in his party, is as foils and targets. Paul Ryan got a taste of that over the weekend, when Cruz, on NBC’s “Meet the Press,” was asked if Ryan was a true conservative and dodged the question, withholding his blessing.


And remember that when someone is as broadly and profoundly disliked as Cruz is, it’s usually not because he’s a principled truth teller.  It’s because he’s frightening.

Posted by Michael-in-Norfolk at Wednesday, October 21, 2015