Facebook: The Number and Rate of People Coming Out Increasing

Surveys have shown that the Millennials are leaving religion in droves.  Now, Facebook has more bad news for the Christofascists and professional Christian crowd: the number of people coming out via Facebook is increasing at a significant pace and looks to perhaps triple in the coming year.  Making this news all the worse for these hate merchants is the reality that as people come out there is a ripple effect of friends and families rethinking the homophobia that has been a staple of the "godly folks" propaganda machine.  And as more people become gay accepting, the fear of others to come out diminishes and hence the accelerating rate.  Towleroad looks at Facebook's findings.  Here are excerpts:

Facebook reports that more than 6 million people have come out of the closet as LGBT on the social media network to date, including 800,000 who have done so in the past year. Furthermore, they report that the rate at which people are coming out is increasing, as are the numbers.

The social media network released the data in response to National Coming Out Day.  They write:


Over the past year, approximately 800,000 Americans updated their profile to express a same-gender attraction or custom gender. Further, not only has the total number of Americans who have come out on Facebook risen dramatically, but so has the number coming out each day. As the chart demonstrates, the number of people on Facebook coming out per day is on track to be three times what it was a year ago.

This graph also shows periods in which there are sharp increases in the number of people coming out on Facebook. The most obvious increase is seen following the aftermath of the Supreme Court decision in Obergefell v. Hodges, indicated by the red vertical line. On a typical day, one out of every ten people who change their “interested in” status on Facebook do so to reflect a same-gender interest.

Another interesting data set shows the number of people who are out as LGB or T state by state, revealing that New York and Nevada have the most out people, while states in the deep south (not surprisingly Mississippi, Alabama, Arkansas, and Louisiana) have the least amount of out people: 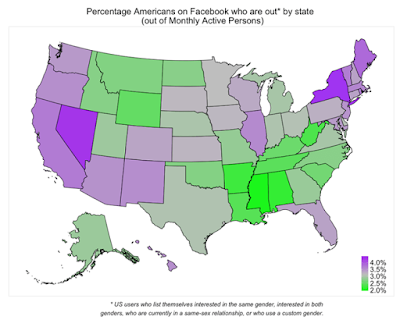 This is all good news for progressives.  For the Christofascists and their political whores in the Republican Party it ought to be a wake up call that their anti-gay agenda is a form of slow suicide.
Posted by Michael-in-Norfolk at Monday, October 19, 2015