Today's GOP: The Beginning of the End of an Informed Democracy 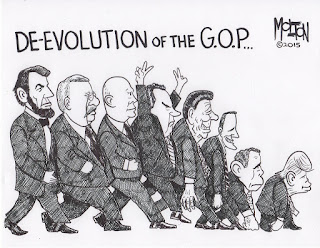 The Founding Fathers believed in the principles of the Enlightenment.  They also believed in an informed population and believed in learning and the advancement of knowledge.  Once upon a time, the Republican Party likewise believed in science and knowledge.  Sadly, now ignorance is celebrated in the GOP and at times the party seems as if it wants to take America back to the Dark Ages.   Science is ignored if not openly attacked and the fantasies of the delusional Christofascist/Tea Party base are advanced as fact.  The GOP's denial of climate change perhaps best embodies the knuckle dragging depths to which the GOP has fallen.  A piece in Salon looks at the GOP's embrace of ignorance and astrophysicist Neil deGrasse Tyson's view of what the GOP is doing to America.  Here are excerpts:

If Americans agree about one thing, it’s that their favorite astrophysicist is Neil deGrasse Tyson. A ubiquitous presence on TV, radio and a host of other mediums, Tyson has become one of our greatest popularizers of science, this generation’s Carl Sagan . . .

Recently, Salon spoke with Dr. Tyson about the second season of “StarTalk,” which premieres Sunday, October 25 at 11pm ET on National Geographic Channel. We asked Neil both about the show and about what he thinks of the role of science in popular culture and political discourse today. Our conversation is below and has been edited for clarity and length.

Why do we need a late-night talk show grounded in science? . . .  the goal here is to leave people with the impression, the correct impression, that science is ubiquitous in our society, in our culture.

Do you think that programs like StarTalk and Cosmos are how we make science more prominent in pop culture?    Yeah, I don’t want to say that they are our best hope. I want to say that the approach to the subject and the approach to the pedagogy, if you will, we have found them to be quite fertile but not uniquely fertile. The website I Fucking Love Science has about 40 or 50 million followers now – something like that. It’s a crazy high number. It’s way more than the number of actual geeks out there, I’m sure of it. So what it means is, that people who are not traditionally geeks are finding their inner geek. Because people are thinking about ways to share this moving frontier of science.

What do you make of that anti-science demagoguery in our political discourse right now? Is that just ideological biases triumphing over good thinking?  The moment you start bringing your personal belief system into governance, then that’s the end of pluralistic democracy. We have words for governance like that and they’re called dictatorships. You have a belief system, you have a philosophy, and that philosophy has some adherence and others have their own philosophies. Those are your personal truths. One of them is, “Jesus is your Savior.” I’m not going to say that Jesus is not your savior. That is your personal truth. But, in a country where we have different religions, if the person who said: “Jesus is your Savior” is going to govern a pluralist country, then their legislations must be based on objective truths, not personal truths.

[W]e have people in Congress whose job is to pass laws. If they pass laws based on things that are not objectively true, that’s the beginning of the end of an informed democracy.

People quietly assume that science will save us from ourselves, whether it is climate change or resource depletion or systemic poverty or any number of other problems. The hope is that we’ll always innovate our way out of crises. Do you think science and technology will solve all these problems for us?  Yes, but it requires enlightened governance for that opportunity to arise. Science doesn’t happen in the abstract. It pays to have science done. Frontier science, historically and in modern times, is generally paid by government-based sources. . .

You remember Thomas Malthus saying that the population growing exponentially will outstrip the food supply that is only growing linearly. This became a philosophy of governance for so long until people realized that they can apply scientific principles to farming and have the food supply go up exponentially just as the population is, and they won’t have a food problem. That’s exactly what happened.
[W]e are producing more food than ever before in the history of our species. So, science solved that problem. Now, enlightened governance has to move the food to where it needs to go. That’s another layering on top of this. The scientist can’t be the one who says, “I’ve invented this way to triple the output on the land. Now, I’ve got to figure out how to get it to where people are starving.” That’s what politicians are supposed to do. That’s what enlightened geopolitics does.

Unfortunately, enlightened governance and today's GOP  are mutually exclusive.   Instead, of enlightened policy, the GOP offers polices based on greed, racism and pandering to the ignorant who cling to Bronze Age myths encapsulated in the Bible.
Posted by Michael-in-Norfolk at Tuesday, October 20, 2015