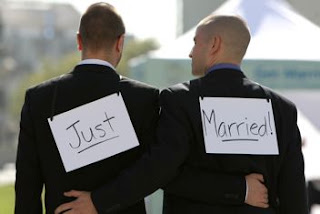 In yet another example of the waning influence of the Roman Catholic Church in educated parts of the world, Italy is at long last on the verge of passing a gay unions bill akin to the German model that would give same sex couples the rights of marriage without the formal title of marriage.  Up until now, the Catholic Church has always managed to kill such legislation.  As The Local.it reports, with church attendance dwindling and some seeing Pope Francis as ushering a more conciliatory tone, it appears that this time the Church's efforts to thwart modernity and equality will fail.  Here are article highlights:

Two days after Italy’s Senate voted to curtail its powers, premier Matteo Renzi swiftly got to work on the next cornerstone of his mandate: the civil union bill.

With Italy being the last major state in western Europe not to offer gay couples any legal rights, Renzi is under mounting pressure to usher the law in, pledging several times to get it passed by the end of the year.

Soon after the debate got underway came the opposing voice of the Catholic Church, with Nunzio Galentino, the secretary general of the Italian bishops conference, saying it was unthinkable that a government would put so much of its energy into a debate that would erode traditional family values.
But with the majority of Italy’s opposition parties, including Silvio Berlusconi’s Forza Italia, supporting the proposals, it doesn’t look as if Galentino’s words will carry much weight in the latest debate.

The Church’s influence on Italian politics has managed to derail attempts by previous administrations to get the law enacted, and while it still plays a strong role in Italy, its influence over the gay rights debate seems to be diminishing.

"It’s not like 30 years ago,” Paolo Segatti, a political sociology professor at the University of Milan, told The Local.

“There are fewer practising Catholics in Italy...this decline has been happening for some time. The Church’s influence is now very small, so I don’t think it will be able to block this.”

The bill, which is based on the German model, stops short of allowing gay marriage but would recognize same-sex unions. Gay couples would also get some of the benefits of marriage, such as being able to receive part of a deceased partner's pension and automatic inheritance.

The most contentious part, which is fiercely opposed by Renzi’s smaller coalition partner, the New Centre Right ()NCD party, is the proposal to allow a gay person to adopt the child of their partner if it only has one legal parent.

[R]ecent opinion polls have indicated a majority of voters favour reform, with support for civil unions and gay marriage having risen significantly after Ireland voted strongly in favour of allowing same sex couples to wed.

If the Church loses this battle after having received a stunning rebuke in Ireland, it will have lost in the last historical bastion of Catholicism.  Pope Francis and the bitter old men in dresses at the Vatican truly need to decide whether the Church will change with the times and modern knowledge or opt instead to become a much smaller, Africa based denomination.  If they choose the latter, much of the money that flows in primarily from the west may decline even further.  Bigotry does have a monetary price.
Posted by Michael-in-Norfolk at Tuesday, October 20, 2015