Norfolk, Virginia Beach and Richmond Have the Most Gay Marriages 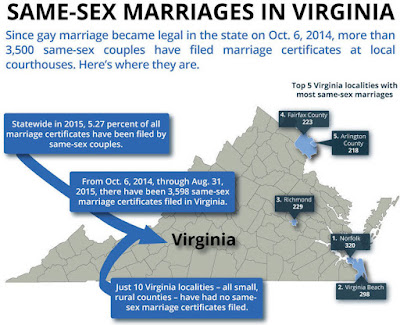 This morning, we are at sea on the Carnival Splendor along with 16 friends, half of whom are married same sex couples.   Most, like the husband and I, got married outside  of Virginia prior to the 4th Circuit ruling on October 6, 2014, that made our marriages legal in Virginia.  Since that date, some 3500 other couples have married in Virginia.  As the Richmond Times Dispatch reports, Virginia Beach, Norfolk and Richmond lead the way in the number of same sex couples tying the knot.  Fairfax and Arlington Counties are close behind.  Here are story highlights:

Out of roughly 3,600 gay marriages that have occurred from last October through August of this year, 320 certificates were filed in Norfolk, the most of any courthouse in the state.

Virginia Beach and Richmond followed with 298 and 229, respectively. Rounding out the top five were Fairfax County with 223 and Arlington County with 218.

"The numbers are great," said James Parrish, executive director of the LGBT advocacy group Equality Virginia. "It definitely shows that there are people in the state that wanted to get married."

"We're a little bit baffled because we're about half the size of Virginia Beach," Norfolk Circuit Court Clerk George E. Schaefer said of his office topping the list. "But we are sort of the center."

Schaefer said much of the Virginia Beach population lives closer to the Norfolk courthouse than the courthouse in their own city. There are no residency requirements for marriages in Virginia, which means couples can go to any courthouse to fill out the required paperwork.

John Osterhout, president of Hampton Roads Pride, said his group has worked hard to help make the area an LGBT-friendly place to live.

"As people from all sectors of society have seen that we love our families as much as any straight person, it is harder to harbor negative images of those of us who are LGBT," Osterhout said.

Statewide, 5.27 percent of all marriage certificates in 2015 involve gay couples. The records are current through the end of August. State officials said local clerks were in the process of submitting certificates for September.

Somewhat ironically, the lawsuit that successfully overturned Virginia's ban on gay marriage began in the Norfolk courthouse that has now processed the most same-sex marriages.