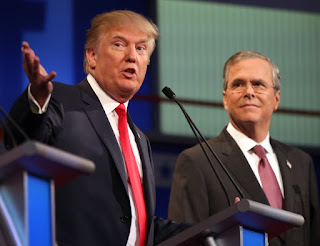 I know I have touched on this issue already, but I find it so delicious that The Donald id now exposing Jeb Bush's - and the GOP's - biggest weakness: the incompetent misrule of George W. Bush and Darth Vader Cheney.  The GOP establishment somehow foolishly thought that Americans had forgotten the disasters that the last Republican occupant of the White House brought down on America.  Donald Trump has been only too happy to remind even the reality challenged GOP base to recall who was in charge when America's worse terrorist attack took place.  Hillary must have cheered as Jake Trapper asked "If your brother and his administration bear no responsibility at all [for the 9/11 attacks], how do you then make the jump that President Obama and Secretary Clinton are responsible for what happened at Benghazi?" Vox looks at Jebbie's idiot response.  Here are highlights:


I don't know if Donald Trump will win the Republican nomination. But even if he doesn't, it's increasingly clear he's going to destroy Jeb Bush before he loses.

Over the past week, Trump and Bush have been in an argument that basically boils down to the question of was George W. Bush president on 9/11/2001?

Trump insists that Bush was president both prior to and during the 9/11 attacks, and he was therefore at least partly responsible for the security failures that permitted the tragedy. And to Trump's credit, there is considerable evidence that George W. Bush was president on 9/11/2001.

Jeb Bush's position is harder to parse: he argues that his brother was only responsible for what happened after 9/11, suggesting, perhaps, that someone else bore the responsibilities of the presidency on 9/11/2001.

The result is this absolutely brutal interview CNN's Jake Tapper conducted with Bush. "If your brother and his administration bear no responsibility at all," Tapper asks, "how do you then make the jump that President Obama and Secretary Clinton are responsible for what happened at Benghazi?"

Trump has pulled Bush into an even more dangerous quagmire: his brother's presidency. Trump is reminding every Republican voter that nominating Jeb Bush will mean running a general election campaign with two disadvantages. First, Republicans will have to answer for George W. Bush's failures in a way they wouldn't if they nominated Marco Rubio or Carly Fiorina or Donald Trump, and second, they'll need to somehow explain why they're holding Hillary Clinton responsible for Obama's presidency even as they don't hold George W. Bush responsible for George W. Bush's presidency.
And Trump, having realized how weak Bush is on this issue, isn't stopping. He's moved from 9/11 to the Iraq War:

Jeb, why did your brother attack and destabalize the Middle East by attacking Iraq when there were no weapons of mass destruction? Bad info?

I cannot stand The Donald, but I love the fact that he is showcasing the horrible consequences GOP rule has had on the nation.   I hope he keeps pounding away at Jebbie.
Posted by Michael-in-Norfolk at Monday, October 19, 2015