Paul Ryan: I'll Be Speaker But Only If the Neanderthals Supports Me 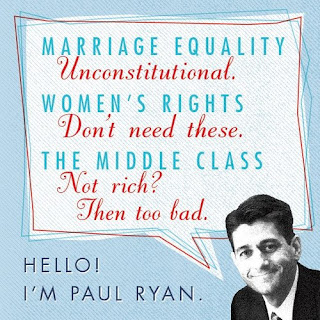 I have no love for Paul "Reverse Robin Hood" Ryan.  That said, the man isn't stupid (even if he is otherwise horrible) since he has told the House Republicans that he will throw his hat into the ring for the position of Speaker of the House only if all of the elements of the Republican conference support him.  Ryan has no desire to step into the nightmare that drove John Boehner into resigning.  The big question, therefore, is whether or not the lunatic Christofascist/Tea Party elements of the House GOP will swear fealty to Ryan.  Ryan has given them until Friday to decide.  Politico looks at the ongoing circus within the Republican Party.  Here are excerpts:


Wisconsin Rep. Paul Ryan, who for years has resisted a move into House Republican leadership, said Tuesday night he would serve as House speaker if he is the party's "unity candidate."

Ryan, the Ways and Means Committee chairman, wants to know by Friday if the 247 members of the House Republican Conference support him. If not, he is "happy" to continue as chairman of the powerful tax-writing panel, the 45-year-old lawmaker said.

The Wisconsin Republican laid out a series of "requests" to his GOP colleagues on Tuesday night, including a demand that the major factions within the Republican Conference endorse him before he agrees to seek the speakership. Ryan is clearly trying to shift the onus of his decision onto the House Freedom Caucus, a group of hardline conservatives that repeatedly sought to undermine Speaker John Boehner.

Ryan wants the group to refrain from any attempts to remove him from the speaker's chair if he makes a decision they disagree with, though it's not at all clear Freedom Caucus will agree.

"I have left this decision in their hands, and should they agree with these requests, then I am happy and I am willing to get to work."

Ryan added: "This is not a job I ever wanted or I ever sought. I am in the job I've always wanted here in the Congress. I came to the conclusion that this is a very dire moment, not just for Congress, not just for the Republican Party, but for our country. I think our country is in desperate need of leadership."

Ryan described himself as "reluctant" to be speaker and said there were some parts of the job he dreaded. But he said would take on the post if the three major groups inside the GOP conference — the Republican Study Committee, the moderate Tuesday Group, and the Freedom Caucus — all endorse him by Friday.

Ryan also wants Republicans to alter the procedure for "vacating the chair," which is essentially a referendum to remove the speaker from office. Conservatives threatened to force such a vote against Boehner earlier this summer, and Ryan believes it's destructive.

The Wisconsin Republican is calling on the next speaker to be more visionary. Ryan agreed with Freedom Caucus members and a large bloc of the GOP in supporting changes to rules and procedures to empower rank-and-file members. But he said those decisions must be made together.

As Think Progress notes, the Neanderthals spittle flecked "real Americans" in the GOP are not reacting well to Ryan's demands:

How the Freedom Caucus, and the right-wing, is reacting to Paul Ryan’s demands

Not well.   Many members of the Freedom Caucus are already publicly rejecting Paul Ryan and his demands.

There are 40 members of the Freedom Caucus so the ultimate outcome is still in doubt. They will be under severe pressure from the Republican establishment to reverse course and support Ryan. But the early signs for Ryan are not positive.

Posted by Michael-in-Norfolk at Tuesday, October 20, 2015