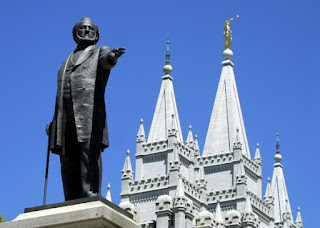 As I have noted many times before, I very much support the concept of taking way tax-exempt status for all religious denominations.  By granting churches tax-exempt status, every taxpayer in the country is being forced to indirectly subsidize churches they don't belong to and which may actively oppose the civil rights of many taxpayers - e.g., the Southern Baptist Convention which is anti-gay and anti-black.  The First Amendment right of freedom of religion by no means requires tax-exempt status for houses of worship.  Indeed, by forcing taxpayers to indirectly support churches that  attack and denigrate them, I would argue that such gifts of tax-exempt status actually violate the First Amendment.  So how is this exempt status justified?  Through the myth that churches are charities.  Unfortunately, most spend a pittance on charity work as a piece here demonstrates.  Here are article highlights:

[W]hat always slips right through the cracks are the tax benefits to religious organizations, which overwhelmingly support Republicans, and are estimated to cost taxpayers nearly double those of hidden off-shore havens. The Secular Policy Institute estimates:

According to Pew, folks affiliated with ties to religious organizations also overwhelmingly support the Republican Party: “Republicans lead in leaned party identification by 48 points among Mormons and 46 points among white evangelical Protestants, with younger white evangelicals (those under age 35) having similar partisan affiliation as their older counterparts.”

What is particularly egregious about the tax benefits going to religious organizations is that they receive these benefits, ostensibly, because they are charities. Researchers at Secular Humanism have calculated:

“The Mormon Church, for example, spends roughly .7% of its annual income on charity. Their study of 271 congregations found an average of 71% of revenues going to ‘operating expenses’…Compare this to the American Red Cross, which uses 92.1% of revenues for physical assistance and just 7.9% on operating expenses. The authors also note that Wal-Mart, for instance, gives about $1.75 billion in food aid to charities each year, or twenty-eight times all of the money allotted for charity by the United Methodist Church and almost double what the LDS Church has given in the last twenty-five years.”

Religious organizations are not non-profits, and if they conduct charitable activities, those activities should be separated out from their normal finances, which should not be financed by the government. However, we know the Republican worldview is all about distorting religion to support their bizarre vision of science and reality – supported by a tax policy that enables their wealthy constituency to support their political efforts.

Republicans talk about tax code reform.  A starting point would be to end this rip off of taxpayers by churches.  Only true charity operations should be tax-exempt.  Let churches start paying taxes on their revenues and on their properties.  The give away that tramples on the rights of non-church goers needs to stop.
Posted by Michael-in-Norfolk at Wednesday, October 21, 2015