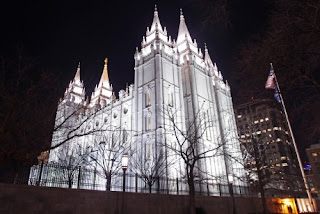 Like the Roman Catholic Church and the Southern Baptist Convention, the Mormon Church has put attacks on gay rights and opposition to same sex marriage ahead of retaining members and spending its wealth on hate and bigotry rather than feeding the poor, tending the sick, and housing the homeless.  In short, the Mormon Church and its homophobic allies have made acting like modern day Pharisees their main agenda instead of putting the Gospel message into practice.  The good news is that as a result, the Mormon Church is estimated to have lost perhaps a million members.  May the trend continue or, better yet, accelerate.  Here are highlights from Huffington Post:

Insiders have indicated that over the last seven years the Mormon Church may have lost up to 1 million members because of all it did to end gay marriage. These formerly loyal Church members decided to side with their lesbian, gay, bisexual and transgender (LGBT) family members and friends instead of their Church. Because of the way the Mormon Church works, you're either with them 100 percent on everything or you're out. If you are LGB or T and act on it, then you will be excommunicated, your name will be removed from Church records and you're no longer a member.

[T]he Mormon Church began its fight against gay marriage in Hawaii. They made elaborate plans to stop it in the very first state where it was being considered. When the freedom to marry finally came to a vote in Hawaii three years later, it passed handily. After its 1998 victory, the Mormon Church continued its stealth campaign to stop gay marriage from happening all over the United States.

In Hawaii, the Mormon Church directly contributed $400,000 and raised far more from its members and friends. The Church then moved on to the next 30 state battles. It employed lobbyist, political consultants, and lawyers. It even created front groups to hide its involvement. The Church spent millions of dollars and mobilized its members for the next 13 years until Proposition 8 passed, its final political victory in 2008. That's when it got caught as the powerhouse that ran and funded nearly all the successful anti-gay marriage campaigns across the county.

In February 2009 I went to Salt Lake City to meet with a man who had contacted me a few weeks earlier and said that he had some Mormon documents he wanted me to have. We met and he turned over hundreds of secret Mormon documents that detailed exactly how the Mormon Church carried on its assault against gay marriage all across the county for the past 13 years.  . . . . It also showed the extremes that the Mormon Church went through to avoid getting caught including setting up its last front group, the crooked National Organization for Marriage (NOM) in 2007 to help qualify and pass Prop 8.

The Mormon Church may have won some battles as it ran roughshod all across the country, but it sure lost the war along with so many members. So while it celebrates the 20th anniversary of its hateful "The Family: A Proclamation to the World," let's hope it learned from its mistakes and finally opens up the Mormon Church to everyone.

Of course, the Mormon Church does not have a monopoly on hypocrisy.  Most of the professional Christian class spend huge amounts to oppose abortion and gay marriage but are nowhere to be seen when it comes to feeding the poor and hungry and helping less unfortunate.  Indeed, they support Republican politicians who aspire to destroy the social safety net and create a new Gilded Age with all its attendant evils.
Posted by Michael-in-Norfolk at Monday, October 19, 2015