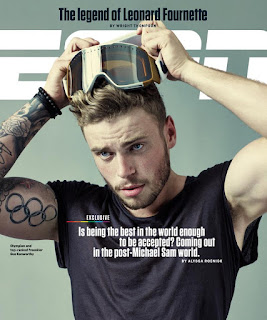 I
have often said that coming out is one of the most powerful acts of activism that one can do.  It is a way of smashing stereotypes and forcing bigots to hopefully rethink their prejudices.  Of course, in addition to helping bring much needed social change, coming also is an incredibly liberating feeling as the need to live a lie or a stage role assigned to you by others suddenly goes away.  Today, American free style skier Gus Kenworthy came out as gay in an interview with ESPN.  Kenworthy won the silver medal in his event for Team USA back in 2014 at the Sochi Olympics in Russia.  Note how he admits that he has known the truth about himself for a long time, but felt he had to hide the truth as he wrote on Facebook afterwards:

I am gay.  Wow, it feels good to write those words. For most of my life, I’ve been afraid to embrace that truth about myself. Recently though, I’ve gotten to the point where the pain of holding onto the lie is greater than the fear of letting go, and I’m very proud to finally be letting my guard down.

My sexuality has been something I’ve struggled to come to terms with. I’ve known I was gay since I was a kid but growing up in a town of 2,000 people, a class of 48 kids and then turning pro as an athlete when I was 16, it just wasn’t something I wanted to accept. I pushed my feelings away in the hopes that it was a passing phase but the thought of being found out kept me up at night. I constantly felt anxious, depressed and even suicidal.

Looking back, it’s crazy to see how far I’ve come. For so much of my life I’ve dreaded the day that people would find out I was gay. Now, I couldn’t be more excited to tell you all the truth. Maybe you’ve suspected that truth about me all along, or maybe it comes as a complete shock to you. Either way, it’s important for me to be open and honest with you all. Y’all have supported me through a lot of my highs and lows and I hope you'll stay by my side as I make this transformation into the genuine me - the me that I’ve always really been.


It is sad that people still have to live in fear and with self-loathing all because the ignorant and bigoted cling to the writings of Bronze Age herders rather than have the courage to think for themselves and admit that they were indoctrinated with lies.   Kudos to Kenworthy.  I wish him much future happiness and success.  More over, I hope he is an inspiration to young LGBT individuals who need a positive role model, especially those living in emotionally and psychologically abusive "Christian" homes.   And yes, Gus is a hottie!
Posted by Michael-in-Norfolk at Thursday, October 22, 2015