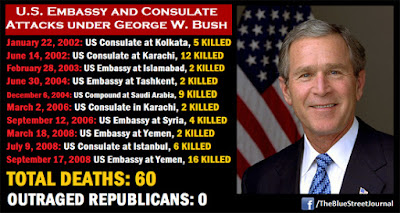 Love her or hate her, today Hillary Clinton will testify before the House Benghazi Committee in hearings about as objective as Stalin's show trials of the 1930's that had no purpose other than to destroy Stalin's chief rivals.  Exposing the truth bore no role in the trials orchestrated by Stalin and the same holds true for the circus that Republicans will oversee today.  As the image above underscores, there have been many more embassy staff deaths under George W. Bush, yet there have been no comparable hearings or committees.  No, the Benghazi Committee has one real goal only: damage Hillary Clinton. Along the way, of course, Republican members of the committee will get to grandstand for the spittle flecked, knuckle dragging members of the GOP base that hate Clinton no matter what she does or doesn't do.  In some ways the hearings are the logical outcome of the GOP's descent into insanity and the alternate reality that it's base lives in daily.  A piece in Salon looks at the Committee and it's pure political agenda.  Here are highlights:

Today Hillary Clinton will appear before the House Select Committee on Benghazi in a likely futile attempt to rebut the fever dreams of cover-up and conspiracy that the committee’s Republican members have gleaned from the comments section at Breitbart. It will be a fantastic piece of theater so far removed from the terrible events that occurred at the American consulate in Benghazi, Libya on September 11, 2012, that it might as well be occurring on the other side of a galactic wormhole. The hearing’s participants could speak gibberish for all we are really going to learn about the attack that killed Ambassador Chris Stevens and three others. Assuming there even is anything more to learn that seven prior congressional investigations have not turned up.

It is a truism of modern political horse-race coverage that reporters are not really interested in accurately explaining a candidate’s positions and policies to the audience. The reason the TV cameras are turned on the candidate every single second is in hopes of catching a gaffe, that race-altering goof that undermines the message he or she is trying to pitch to voters.

The hope of inducing that type of campaign-altering gaffe is really the reason why the select committee is dragging Hillary Clinton up to Capitol Hill today. No matter what the most rabid right-wingers think, these hearings are not about investigating a cover-up the way the Watergate or Iran-contra hearings were. They are not about figuring out what really happened in Benghazi, because we already have dozens of reports produced by other congressional committees, federal agencies, and the military to explain what happened and why.

No, what the Republicans want – what they need in order to justify the colossal effort they have put into building Benghazi up to be worse that Iran-contra plus Watergate and Teapot Dome times eleventy billion – is a Clinton gaffe along the lines of “What difference does it make.” Only worse. Something that will rip off the Democratic frontrunner’s carefully spit-polished image and reveal the shrill, corrupt, power-mad harridan underneath.
[T]his has been the Republican way with Hillary Clinton for 25 years now. No matter how many investigations clear her of any wrongdoing on an issue, the GOP just cannot accept it. There must always be one piece of information it did not turn up, one thread it failed to pull until the whole sweater unraveled.

The only question is how they will go about it. Will they grill her like a salmon, coming at her from every angle, interrupting, badgering, trying to confuse her until the internal dam that has always successfully kept her bottomless evil at bay finally bursts? Or, as Brian Beutler argues, will they be polite and restrained while testing her memory of isolated details to try and trip her up?

[A]t heart, this is all just one long political attack ad, a sequel to “Hillary: The Movie“ in the guise of a congressional investigation. It’s theater of the absurd for an audience of suckers.

As noted before, to be a Republican nowadays, one has to lack any integrity, and be either insane, a white supremacist, a religious fanatic, motivated solely by greed, or a combination of the foregoing.  It is a very ugly reality.
Posted by Michael-in-Norfolk at Thursday, October 22, 2015