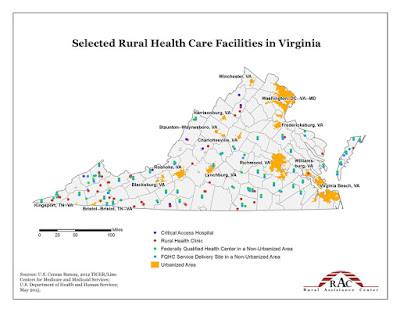 Here in Virginia, the Virginia GOP - like the national party - opposes anything related to Barack Obama, including Medicaid expansion which would extend healthcare coverage to roughly 400,000 working Virginians and give desperately needed financial relief to many of Virginia's hospitals.  Perhaps such racist inspired conduct against America's first non-white president should not be surprising in the state that pioneered "Massive Resistance" and the closure of public schools rather than allow black children attend school with withe children.  But what is amazing is the fact that the Virginia GOP is willing to threaten the continued existence of many hospitals, especially in rural areas where the GOP retains power by playing on voter racism, homophobia and anti-immigrant bigotry.  To fight back, the Virginia Hospital & Healthcare Association (VHHA), has launched  a statewide public awareness campaign to "alert Virginians to the financial challenges confronting Virginia hospitals" and indirectly to alert Virginians to the damage being done to health care in Virginia by the Virginia GOP obstructionism and willingness to kick working families into the gutter.  Blue Virginia has highlighted some top points of the campaign's message:

*Virginia hospitals are vital both to people's health and to the economy; they generate $35.8 billion in economic activity, employ 115,026 people with a payroll of $7.9 billion and rank among the top five employers in 60% of Virginia counties.


*Virginia hospitals are facing significant economic headwinds. This is one of the most heavily regulated industries in the country, receiving over 60% of its revenue from either Medicaid or Medicare. In Virginia, Medicaid pays about two thirds of what it costs hospitals to provide care, and more cuts in reimbursements are likely. "This is a non-sustainable situation."


*"We're here today to begin a dialogue to try to bring to the public's attention that there's a problem, that we are facing serious headwinds, and that there are a lot of health systems and hospitals in the state that are bailing water pretty seriously."


*The goal is to engage "all parts of the political spectrum" to come up with a "Virginia solution that will be sustainable for the long term."


*Virginia hospitals contribute to the overall health and well being of the Commonwealth, so "the ripple effects of policies that harm hospitals reach much farther and wider than hospitals or health care systems."

*"This isn't a partisan issue at all, this is truly a health care issue and a community issue."


*Today, there are "challenges that we've never faced before in the health care system, and it's becoming more and more difficult to meet the needs of the underserved while keeping our hospitals fiscally sound, and that's sometimes especially true in rural areas."

*Hospitals "want to start a dialogue about the real problems that exist and the need for resolution to preserve Virginia's vitally important work of health care...and the significant economic contributions we make."


*Rural hospitals are typically the largest employers in their area. Just about half of rural hospitals operate in the red in Virginia...and they're all very much challenged in terms of their sustainability, their ability to continue to be there for their communities..."

I've written on this issue before and it is one of the issues addressed in my September, 2015, column in VEER Magazine which is on the shelf now.  Sadly, supporting the Commonwealth's hospital system should not be a partisan issue, but given the intransigence of the Virginia GOP, it has become one.  The one irony is that many GOP dominated rural areas will end up losing not only easily accessible health care, but will also see their region's largest employers close down.  Their stupidity, racism and overall bigotry will ultimately be the root of their own undoing.  Karma can indeed be a bitch.

Posted by Michael-in-Norfolk at Wednesday, September 16, 2015