Bad News For Those Who Want Special Rights fro Christofascists 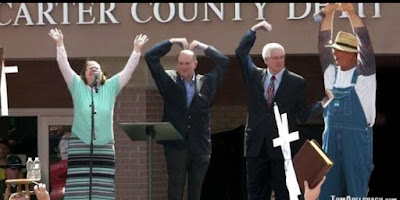 While the far right, especially evangelical Christians, continue to demand special rights for religious (only if they claim they are Christians, of course), a majority of Americans reject their demands and say that equality under the law trumps religious belief, whether feigned or genuine, according to a new ABC News/Washington Post poll found here:

In general, 74 percent in this ABC News/Washington Post poll say that when a conflict arises, the need to treat everyone equally under the law is more important than someone’s religious beliefs.

In the specific case at hand, 63 percent say Davis , of Rowan County, Kentucky, should be required to issue marriage licenses despite her religious objections.

Meanwhile, the U.S. Court of Appeals for the 6th Circuit rejected yet another frivolous appeal by Davis and her  in my view disbarment worthy attorney, Mat Staver of the parasitic Liberty Counsel.  Talking Points Memo looks at this development.  Here are excerpts:

A motion by Kim Davis -- the anti-gay marriage clerk in Kentucky -- to halt a requirement that she issue marriage licenses to gay couples was denied by a federal appeals court Tuesday.

Davis is suing Kentucky Gov. Steven Beshear (D) and state librarian Wayne Onkst for enforcing a requirement that Kentucky clerks grant same-sex marriage licenses, which she objects to on religious grounds. She had ask the 6th Circuit U.S. Court of Appeals to temporarily halt the requirement while the lawsuit proceeds.

"Davis has not demonstrated a substantial likelihood of success on her federal constitutional claims," the panel of judges said in their order denying the request.

While the professional Christian crowd and Republican political whores continue to laud Davis, the irony is that her hypocrisy and the ridiculousness of her claims after four marriages, serial adultery and giving birth to bastard children may well be undermining the Christofascist effort to have license to discriminate laws enacted across America.  Hopefully, the Davis spectacle is bringing home the truth that conservative Christians are selfish, ignorance embracing individuals who need to be viewed with scorn, not respect or the award of special rights.
Posted by Michael-in-Norfolk at Wednesday, September 16, 2015