Fantasies and Fictions at G.O.P. Debate 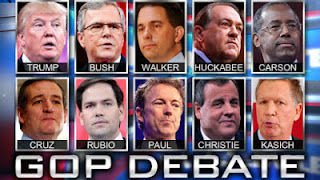 In an op-ed in the New York Times, Nobel Prize winning economist Paul Krugman adds to the slaps downs being give to the Republican Party and its would be nominees in the wake of the GOP presidential debate on Wednesday evening.  As noted in an earlier post yesterday, the Republican Party is increasingly un-tethered from reality and now is most focused on restating talking points that will win points with the racist, homophobic, misogynist base of the party or adhere to an fantastical ideology that wants to recreate a version of the 1950's that never existed except perhaps for the privileged positions held by whites.  Here are column highlights:

I’ve been going over what was said at Wednesday’s Republican debate, and I’m terrified. You should be, too. After all, given the vagaries of elections, there’s a pretty good chance that one of these people will end up in the White House.


Why is that scary? I would argue that all of the G.O.P. candidates are calling for policies that would be deeply destructive at home, abroad, or both. But even if you like the broad thrust of modern Republican policies, it should worry you that the men and woman on that stage are clearly living in a world of fantasies and fictions. And some seem willing to advance their ambitions with outright lies.

You’re probably tired of hearing this, but modern G.O.P. economic discourse is completely dominated by an economic doctrine — the sovereign importance of low taxes on the rich — that has failed completely and utterly in practice over the past generation.

Think about it. Bill Clinton’s tax hike was followed by a huge economic boom, the George W. Bush tax cuts by a weak recovery that ended in financial collapse. The tax increase of 2013 and the coming of Obamacare in 2014 were associated with the best job growth since the 1990s. Jerry Brown’s tax-raising, environmentally conscious California is growing fast; Sam Brownback’s tax- and spending-slashing Kansas isn’t.

Yet the hold of this failed dogma on Republican politics is stronger than ever, with no skeptics allowed. . . . . The only candidate talking sense about economics was, yes, Donald Trump, who declared that “we’ve had a graduated tax system for many years, so it’s not a socialistic thing.”


Indeed, the only candidate who seemed remotely sensible on national security issues was Rand Paul, which is almost as disturbing as the spectacle of Mr. Trump being the only voice of economic reason.

The real revelation on Wednesday, however, was the way some of the candidates went beyond expounding bad analysis and peddling bad history to making outright false assertions, and probably doing so knowingly, which turns those false assertions into what are technically known as “lies.”


Mr. Christie’s mendacity pales, however, in comparison to that of Carly Fiorina, who was widely hailed as the “winner” of the debate.
Some of Mrs. Fiorina’s fibs involved repeating thoroughly debunked claims about her business record. No, she didn’t preside over huge revenue growth. She made Hewlett-Packard bigger by acquiring other companies, mainly Compaq, and that acquisition was a financial disaster.

But the truly awesome moment came when she asserted that the videos being used to attack Planned Parenthood show “a fully formed fetus on the table, its heart beating, its legs kicking while someone says we have to keep it alive to harvest its brain.” No, they don’t. Anti-abortion activists have claimed that such things happen, but have produced no evidence, just assertions mingled with stock footage of fetuses.

So is Mrs. Fiorina so deep inside the bubble that she can’t tell the difference between facts and agitprop? Or is she deliberately spreading a lie? And most important, does it matter?

I began writing for The Times during the 2000 election campaign, and what I remember above all from that campaign is the way the conventions of “evenhanded” reporting allowed then-candidate George W. Bush to make clearly false assertions

Now we have presidential candidates who make Mr. Bush look like Abe Lincoln. But who will tell the people?

Once again, part of the problem is easily identified: the mainstream media that refuses to expose and call out GOP lies.   This conduct lead to the Iraq War fiasco, yet the media has learned nothing.  If anything, it has become even more irresponsible.
Posted by Michael-in-Norfolk at Saturday, September 19, 2015