Can Jeb Bush Survive Trump and His Own Reverse Robin Hood Tax Plan? 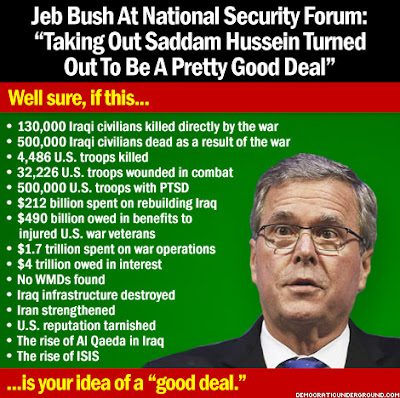 I have always viewed Jeb "Jebbie" Bush as seeing himself as entitled to the presidency.  Never mind that he has never disavowed the Policies of his cretin brother that bankrupted the country, started an unnecessary war, and threw away thousands of lives among our servicemembers.  After all, he's a Bush and what he wants should be his.  Thus, it is entertaining in a cynical way to see Jebbie languishing in the polls and being blown away by Donald Trump.  Adding to Jebbie's lack of appeal is his new tax change proposals that would give most of the tax relief to the 1%.  A piece in Politico looks at Jebbie's woes and the growing fear among the GOP donor class that his presidential ambitions may be toast.  Here are highlights:


Nobody is more nervous about this week's debate than Jeb Bush’s top fundraisers -- and no audience will have more to say about his future viability as a candidate.

New York Jets owner Woody Johnson knew it. He recognized the group assembled at his Rockefeller Center office in Manhattan last Wednesday was in need of some reassurance after Bush’s unimpressive performance in last month’s GOP debate, so Bush’s national finance chairman, recalled one attendee, gave a personal pledge: Jeb would be “well prepared” for the second debate this week.

He’d better be. Five-plus months before the first ballots are cast, Bush faces the kind of do-or-die moment most top-tier candidates confront far later in the primary process – a chance to revive a campaign that has shattered fundraising records, but sunk as low as 6 percent in recent national polls.

Bush, one former adviser to his father said, "needs to show he’s the tough-minded guy we know he is." If he doesn’t, the former aide added, "Well, you know, it might be over."

The Bush campaign privately thinks Bush’s slow-burning fuse – evidenced on the golf course and in sometimes-testy debate sessions – has at long last been lit. But the biggest fear, expressed by Bush allies, donors and party operatives to POLITICO, is that another lousy debate performance will precipitate an exodus of the big money ($100 million-plus in super PAC and campaign cash so far) that has kept the former Florida governor afloat despite his dismal poll numbers.

Bush's problem isn’t merely a matter of being labeled the scion of the loathed GOP political elite, it’s a question of tone. He’s polite, reasonable, bilingual — and the party’s base wants a fighter like Trump who is blustery, visceral and a defiant monolingual speaker of the language his new buddy Sarah Palin calls “American.”

Bush is fond of saying he’s his “own man,” with an emphasis on the “own” part -- to shrug off the gilded albatross of his family’s mixed political legacy -- but these days Trump is making Bush answer for the word “man” too.

In the five weeks since the first debate, he’s ceded his second-place position to Ben Carson, sinking from 10 percent of the national vote to high single-digits.

But several Bush advisers said he’s given up illusions of being a frontrunner, and of emerging from the Republican primary without getting down in “the mud” with Trump. But how far to go? The key, people close to Bush say, is coming up with a tough approach without making the candidate want to crawl out of his own, deeply civil skin. To that end, he has been huddling with his team, whenever time permits, to work out a plan of attack for the primetime showdown with Trump at the Reagan Library Wednesday.

While Bush wallows in the polls, his recently unveiled tax reform plan, as mentioned, is a bonanza for the 1% and offers little for working Americans.  The chart below says it all: 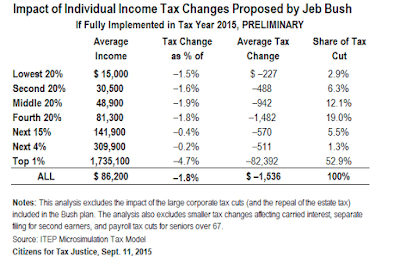 In short, like most in the GOP, Bush wants to screw most of us while giving away the store to the very wealthy, something his brother did as well.  Will average voters allow themselves to be seduced yet again by voodoo economics and the GOP's reverse Robin Hood agenda?
Posted by Michael-in-Norfolk at Wednesday, September 16, 2015