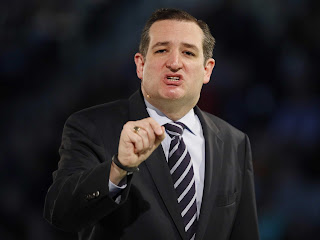 While Scott Walker is hoping that his vow to kill labor unions nationwide will save his sorry ass and cratering campaign, the even more insane Ted Cruz is seemingly hoping - perhaps dreaming is a better term - that shutting down the federal government over funding for Planned Parenthood will save his sinking presidential prospects.  97% of Planned Parenthood's operations go to providing health care to poor women.  But all the GOP and lunatics like Cruz can look at is the 3% of operations.  As for the women who would be kicked to the gutter if Planned Parenthood were forced to close, Cruz and company have no alternative. Just let them die apparently.  Here are excepts from Salon:

The ability of the Republican Party to sabotage its polls and electoral prospects by clinging to narratives built on the hysterical voices shrieking nonsense through conservative minds like Santa Ana winds blasting across the vast desert wastelands of California will never cease to amaze.

Republicans [are] on the verge of leading a government shutdown over another fact-free assertion: That Planned Parenthood, the largest provider of healthcare for the underprivileged in America, is selling off the organs of aborted fetuses for scrap.

Subsequent investigations by at least five states of their Planned Parenthood clinics found no violations of the handling of fetal tissue. An analysis of both the videotapes and the raw footage released by the Center for Medical Progress indicated that, despite claims to the contrary, the allegedly unedited source tapes had in fact been edited, with no indication of what might have been taken out. Not one witness has stepped forward to corroborate the tales of the tapes, which is hard to believe if the disgusting butchery described had actually occurred.

In short, the whole controversy is garbage.

This has not stopped Republicans. First they subjected Planned Parenthood to the “kangaroo court” of Congressional hearings that mostly provided House members the opportunity to grandstand.

The extreme right wing, led by figures like Ted Cruz, is spoiling for this fight, convinced despite all evidence, both and that the Democrats and President Obama will be blamed if federal agencies are shuttered and more World War II veterans can’t get into the memorial on the Washington Mall. Those polling numbers that show otherwise? Lies. Other polls that indicate a majority of the American people don’t want to see Planned Parenthood stripped of its funding? That just means the lamestream media hasn’t really reported this story.

[H]ow can our country function when one half of the ruling political class bases its strategies and policies on nothing but the phantom voices in their heads?

The answer is, we can’t. If we’re lucky, the candidacy of Donald Trump will cause a Republican Party split big enough to reconfigure the GOP into something resembling a functional organism, purged of the fanatical elements and composed of people who understand that no disagreement is worth turning off all the lights.

Posted by Michael-in-Norfolk at Monday, September 14, 2015