Jeb, Your Brother Did Not Keep Us "Safe"

As noted in the prior post, one of the most idiotic things said during the GOP presidential "debate" on Wednesday was Jeb "Jebbie" Bush's delusional statement that his brother had kept Americans "safe."  That kind of statement is only true in the alternate universe of today's GOP and ignores the reality that George "Chimperator" Bush had warnings of a threat of an major Al Quaeda attack and ignored it.  After allowing 9-11 to happen, Jebbie's idiot brother lied and mislead the nation into an unnecessary War that took the lives of thousands of Americans and cost the nation billions and billions of dollars better spent on rebuilding America domestically.  Oh, and did I mention that the Chimperator set the stage for the rise of ISIS?  Only in an alternate universe is this keeping us "safe."  Think Progress delves further into the insanity of Jebbie's statement which shows his total unfitness for the White House.  Here are excerpts:

Former Florida Gov. Jeb Bush doubled down on the idea that his brother “kept us safe” as president on Thursday — making an even more explicit connection to the Sept. 11 attacks on the World Trade Center — the day after he made the claim during the second Republican presidential debate on CNN.

His campaign tweeted a graphic with the phrase “he kept us safe” paired with the carnage after the attacks. . . . . It’s a whitewashed version of history.

Much of the analysis following the World Trade Center attacks revealed that the Bush administration ignored warnings that such a plot could be in the works. Declassified documents indicate that Osama bin Laden had been planning the attacks for years. But rather than preparing for potential terrorist attacks, reports indicated that the Bush administration was more focused on missile defense.

Furthermore, even if Bush is trying to argue that it was his brother’s post-9/11 counterterrorism strategy that kept America “safe,” most evidence indicates that the war in Iraq was dangerously misguided. The Iraq war wasn’t linked to the attacks on U.S. soil, and a 2006 intelligence report indicated that the U.S. presence in Iraq actually worsened the threat of terrorism. Ultimately, nearly 5,000 American troops and other allied troops gave their lives during the war in Iraq. 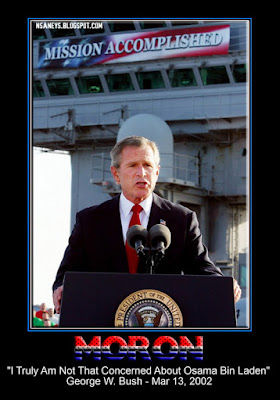 Posted by Michael-in-Norfolk at Friday, September 18, 2015