The Vatican Declares War on the Transgender 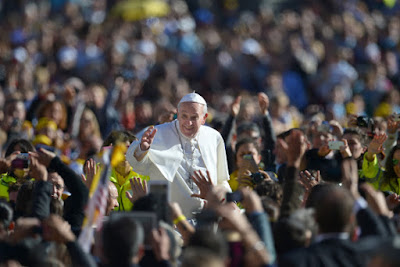 As I have noted before, I think those who are hoping that Pope Francis will modernize the Roman Catholic Church are in fantasy land.  Yes, the Church is streamlining its annulment process, but that does little to change the underlying mindset of the bitter old men in dress in Rome and plush bishoprics across the globe.  The bottom line is that the so called leaders of the Church cannot let go of the 12th century writings of those who nowadays could well be deemed to be psychotic and mentally ill.  The latest example of the Vatican's embrace of 12th century ignorance is the attack on those who are transgender who are barred from being godparents.  Personally, I do not understand why anyone who is LGBT would want remain in any way affiliated with Catholicism.  That said, this latest Vatican attack  will perhaps be a wake up call those in the dream world of seeing Francis as a reformer.  Here are highlights from a piece in The Advocate:

The Vatican recently announced that it is “impossible to allow” transgender people to be godparents. In the warped logic of the Congregation for the Doctrine of the Faith [formerly known as the Inquisition], identifying as transgender “reveals in a public way an attitude opposite to the moral imperative of solving the problem of sexual identity according to the truth of one's own sexuality.”

This ruling was handed down when Alex Salinas, a Spanish man who had been assigned female identity at birth, sought to become his nephew’s godfather. The local bishop originally agreed, but then asked for advice from the Vatican. The Vatican stated, “It is evident that this person does not possess the requirement of leading a life according to the faith and in the position of godfather and is therefore unable to be admitted to the position of godfather or godmother."

The Vatican’s declaration that Alex and other transgender people are unfit to be godparents is exclusionary and hurtful. It says to the Roman Catholic Church’s transgender members, to the people who love and care for them, and to the entire church that trans folk are “less than,” and not fully welcome in our midst. It is a blanket statement that anyone who does not fit neatly into binary gender categories is morally suspect, inherently unworthy to serve as a guide to an ethical, faith-based life.

[T]his is another instance of church officials using the church’s sacraments, which are meant to be signs of how grace is present in human life, as dividers rather than builders of community. Transgender people have already been told not to seek ordination or acceptance into religious communities, that their baptismal certificates will not be changed to reflect their true gender, and that marriage is based on the birth gender. Now, they are told they cannot even be sponsors of someone entering into the life of the church.

My advice?  Walk away from Catholicism and encourage your friends and family members to do likewise.  If enough people leave, the Church will either accept modern knowledge or wither and die.
Posted by Michael-in-Norfolk at Sunday, September 13, 2015