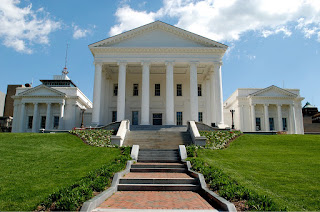 Neither major political party is innocent when it comes to utilizing gerrymandered districts to retain power.  However, during the last redistricting round, the Virginia GOP took the rigging of districts to a new level, in no small part because it is the only way to hold power when the party's agenda is so increasingly out of step with the views and desires of more and more Virginians.  Two lawsuits are pending challenging the ridiculous districts the Republicans force through in 2011.  Now a third lawsuit has been filed.  The GOP will vigorously fight any changes because compact, contiguous districts could spell the end of GOP domination of the Virginia General Assembly, especially the House of Delegates.  The Washington Post looks at the latest lawsuit.  Here are highlights:


A group of Virginia residents sued state elections officials Monday over 11 legislative districts — including some in Northern Virginia — charging that they violated the state Constitution by enforcing election maps that too easily protect incumbents.

The plaintiffs argue that during the last round of redistricting, in 2011, the General Assembly drew the districts to give incumbents the best chance at holding on to their seats at the expense of geographical compactness, which the Constitution requires. If successful, the suit, which is the third recent court challenge to the state’s elections maps, could scrap the maps and send vulnerable lawmakers scrambling to compete in newly drawn districts.

The House and Senate districts in question are spread all over Virginia and include parts of Prince William County, Manassas, Manassas Park, Fairfax County and Arlington County.

The lawsuit targets five House districts and six Senate districts. In the overwhelmingly Republican House, bills intended to reduce the influence of politics on redistricting have quietly disappeared in subcommittees without going to a floor vote. . . .  the Senate, where Republicans have a one-vote edge, passed three nonpartisan redistricting bills in this year’s session only to see them die in the House.

Two previous lawsuits argued that lawmakers illegally packed African American voters into both state and federal districts, diluting their influence elsewhere. One of the suits challenging a single congressional district was successful, and a federal court is sorting out a new map; in the second, judges are still deliberating challenges to a dozen House districts.

The lawsuit argues that all of the 11 targeted districts were intentionally drawn in serpentine shapes to include enough partisan households to ensure the reelection of incumbents. One district was described as a “jagged, U-shaped district surrounding and interlocking,” with another district “like a piece of a poorly designed puzzle.”

In recent years, redistricting in Virginia has helped attract candidates who appeal to the most conservative and liberal extremes, which advocates for nonpartisan redistricting blame for bringing Washington’s gridlock and polarization to Richmond. 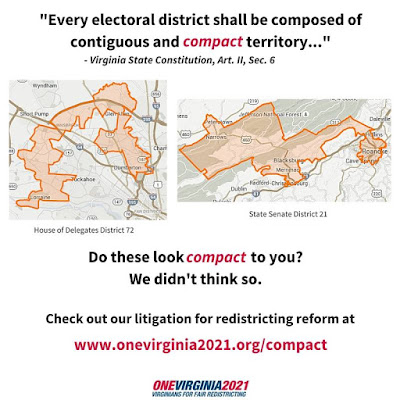 Posted by Michael-in-Norfolk at Tuesday, September 15, 2015