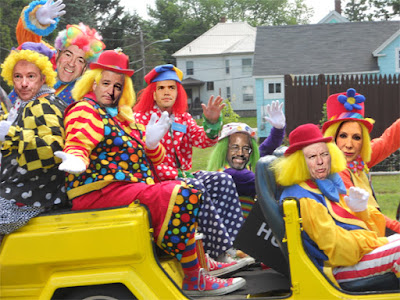 I missed the first few minutes of last night's GOP circus debate and kept watching until the husband finally said that he could not stand it any longer (and after he yelled back at Mike Huckabee's sicken defense of Kim Davis).  Perhaps the most frightening thing is that the clown car occupants are what a once proud and rational political party has to offer the nation in the way of candidates. Other than perhaps Kasich, none strike me as fit for the office of presidency.  Rather, they are a bunch of pandering whores and con artist charlatans who would seriously put the nation at risk if they occupied the White House.  Many of the positions underscore just how dumbed down the GOP base has become that any of these individuals can be seen as a possible American president.  Dominating it all, of course, was Donald Trump, a true egomaniac who takes self-adoration to new heights.  A column in the New York Times looks at last night's circus.  Here are excerpts:

[S]ubstance had to muscle its way through the show business, by which I mean Donald Trump’s attempt to turn everything into an adolescent popularity contest and CNN’s willingness to reward that by filtering the entire evening through the prism of the Republican field’s proven ratings magnet: Trump, Trump, Trump.

So it went, somewhat tediously and surreally, for many stretches of the debate on Wednesday night and especially for the first half-hour, during which Rand Paul took the precise measure of — and raised the correct question about — the egomaniacal front-runner.

“I think really there’s a sophomoric quality that is entertaining about Mr. Trump, but I am worried,” he added, and I nodded so vigorously at the “worried” part that I’m going to need balm and a neck brace tomorrow.

Paul went on to single out Trump’s “visceral response to attack people on their appearance — short, tall, fat, ugly. My goodness, that happened in junior high.  . . . . And “junior high” is too easy on him, too kind. Trump comes from, and belongs in, the sandbox . . .

I mentioned my nodding, but my real injuries came from shaking my head, over and over, because I couldn’t quite believe the Trump-centric nature of it all. I’m still mystified that he’s done this well in the polls for this long.

[H]ave we sunk to a point where we’re prepared to reach for someone so careless with his insinuations, so merrily and irresponsibly ignorant,  . . .

Are we buoyed by a bully who calls anyone who disagrees with him a “loser,” promises vaguely that his presidency will be “unbelievable” (his favorite adjective, and an unintentionally telling one), and presents little besides his tumescent ego and stagey rage?

During the second half of the debate in particular, the conversation moved far enough away from Trump for all of the candidates to strut their stuff, for whatever that stuff was worth.

Cruz predictably won the awards for Most Strident and Most Smarmy, talking directly to the  camera rather than whoever had asked him a question.

I seriously worry about the future of the nation and what lays ahead for my children and grandchildren if one of these clowns makes it to the White House.  Be afraid, very afraid.
Posted by Michael-in-Norfolk at Thursday, September 17, 2015