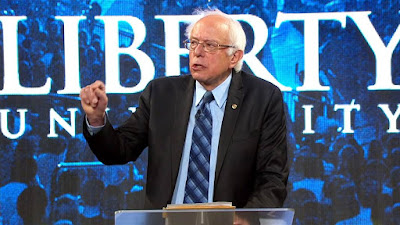 I make no secret of the fact that I view the late Jerry Falwell's Liberty University in Lynchburg, Virginia as a foul blight on Virginia.    Liberty University and its affiliated entities make the Pharisees of the New Testament look like veritable good Samaritans and charity workers. For the most part the University and its faculty and student body flock to gay-hating, religious extremist who hate just about everyone but themselves and the support almost every reverse Robin Hood element of the GOP agenda.  They, like many of the "godly folk" are perhaps the strongest argument for disclaiming any affiliation with Christianity.  Thus, it was the height of audacity for Bernie Sanders to address the Liberty student body at a convocation earlier this week.  Surprisingly, at least some of the student body and faculty recognized their betrayal of the Gospel message when faced with Sanders' honest and compelling call out to the modern day Pharisee crowd.  Daily Kos looks at the reaction of one evangelical's reaction to Sanders' address.  Here are highlights:

He was convicting the Christian leaders and the religious leaders in that university, and calling us out for being complicit in the abandonment of those who suffer, the least of these, and siding with the powerful and rich, the masters of this world.  And he was convicting us and calling us out, and we scorned him, and we stared him down; and, with sour faces, we thought, "Who is this wacko, and why do all these people seem to follow him, seem to like him – this wild-haired Jew, crying out from the wilderness of the political left, in his hoarse voice?"

When I heard Bernie speaking in that way, when I saw that guy on stage at Liberty University, I saw John the Baptist...crying out to the religious leaders, the Pharisees of his day, calling them corrupt and complicit with those who have all the power and all the money and all the wealth, and abandoning the people that God loves, that God cares about...

As I heard Bernie Sanders crying out to the religious leaders at Liberty University, in his hoarse voice, with his wild hair – this Jew – and he proclaimed justice over us, he called us to account, for being complicit with those who are wealthy and those who are powerful, and for abandoning the poor, the least of these, who Jesus said he had come to bring good news to. And in that moment something occurred to me.

Those words echoed in my heart as I listened to that crazy, hoarse-voiced, wild-haired Jew standing in front of the religious leaders of the Evangelical Movement, calling us to account, as a Jew once did before, telling us that he intends to care for the least of these, to clothe the naked, to shelter the homeless, to care for the sick, to set the prisoners free.

I wouldn't be much of a Christian if I didn't stand on the side of gospel for the poor, because, the last time I checked, that's where my master Jesus stood, and I'll stand with Him. And,  for now, that means I stand with Bernie Sanders.

This evangelical pastor is much more eloquent than me when it comes to focusing on the manner in which the far right Christian extremists and the parasite like professional Christian set have betrayed the Gospel message and instead focused on hate, racism, homophobia and made a mockery of what the Gospels say a Christian should be.  If Christ existed - and I do have my doubts - and if the Gospels accurately portray his message, he would be horrified to see what the "godly folk" and hate merchants like Mike Huckabee, Mat Staver, Maggie Gallagher, and a host of others have done in his name.  Kudos to Sanders!
Posted by Michael-in-Norfolk at Thursday, September 17, 2015