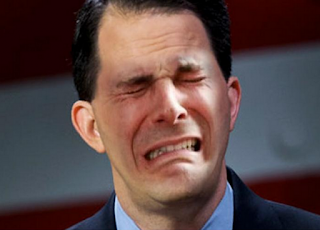 With his campaign in crash and burn mode, in obvious desperation, Scott Walker has stated that he wants to take his anti-union campaign nationwide.  In one report, Walker said he wanted to end all federal employee unions.  This message is supposed to electrify working class voters who ironically have seen their wages stagnate for 40 years largely because of the decline in labor unions.  Walker's message may play well with plutocrats, but average Americans need to run screaming from Walker.  I make no secret of the fact that I find Walker to be a thoroughly despicable individual.  Let's hope that this is the beginning of the end of Walker's presidential campaign.  Here are highlights from Politico:

Scott Walker is doubling down on his anti-union message. But GOP voters don't seem to be listening.  Walker traveled to union-friendly Las Vegas Monday to inveigh against "big-government union bosses."

He pledged elimination of the National Labor Relations Board. He promised a national “right to work” law freeing workers from mandatory payments to unions that bargain collectively on their behalf. And he said he’d block President Barack Obama’s proposal to expand overtime eligibility to 5 million new workers.

For Walker it may be a last stand as his support tumbles from double digits as recently as July to a dismal 2 percent, according to an ABC News/Washington Post poll released Monday.

Walker’s presidential campaign is premised in a large part on the idea that GOP primary voters will flock to a candidate willing to confront and diminish the power of organized labor. Walker aides say his anti-union platform is designed to portray the Wisconsin governor as a politician who can easily translate his statewide successes to the federal government.

But one of 2016’s biggest surprises is that the anti-union message isn’t selling, either for Walker or for New Jersey Gov. Chris Christie, another GOP candidate who’s built much of his campaign around his willingness to face down union bosses. Unions don't seem to loom especially large as a problem to rank-and-file Republican voters.

Also working against Walker and Christie is the Donald Trump factor. The billionaire mogul has excited a wave of populist-minded, lower-income voters who, when it comes to unions, are hardly conservatives at all. Trump himself is mildly pro-union, an occupational necessity for any real estate magnate operating in the Northeast. "Unions still have a place in American society," Trump wrote in 2000.

Harold Schaitberger, the president of the International Association of Fire Fighters, said, “Mr. Trump, who I don’t believe has very much in common with our goals and our agenda, even he calls out recently the gross CEO pay and the disparity between the CEO class, if you will, and the workers that actually help make their companies successfully." Roughly half of Schaitberger's rank and file is Republican.

Perhaps some of the moronic racists and anti-immigrant bigots are finally figuring out the reality that the GOP's anti-union agenda only aids huge corporations and the wealthy and only serves to speed the movement of the nation to a new Gilded Age where the 1% have all the wealth and the rest of us scramble for the crumbs they drop.
Posted by Michael-in-Norfolk at Monday, September 14, 2015