The Radicalization of the GOP 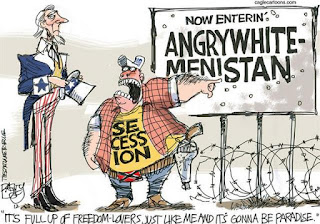 A piece in Salon raises a question that needs to be answered: why is the mainstream media so afraid to report on the insanity - and outright racism - now the norm in much of the GOP base?  Like religious extremists, the media is afraid to call out birthers and other conspiracy theory advocates in the GOP and the sad reality that facts and objective reality simply no longer matter to a seemingly growing segment of the GOP base.  And what's worse, by failing to do so, the media is enabling the crazies to pass as "normal" and pull others along with them.  One of the two major political  parties has wondered off into extremism and lunacy, yet the media refuses to report on it and mere parrots talking points not based in reality.  The result is serious harm to the future of America.  Here are column highlights:

The Republican birther brigade really is one of the most astonishing political stories in recent years. What’s truly bewildering and newsworthy is that the birther ranks are apparently expanding and likely number in the millions nationwide. The fact that Republican frontrunner Donald Trump personally vouched for the baseless, anti-Obama conspiracy theory has only elevated its significance.

So why does the press continue to largely turn a blind eye to the telling spectacle? . . . The media’s birther blind spot is part of the larger press failure to grasp, and accurately detail, the truly radical nature of the Republican Party under President Obama.

For instance, since June 1, the New York Times has published approximately 180 articles or columns that included the word “Trump” five or more times, according to Nexis. But just a handful of those have made any mention of Trump’s previous birth certificate folly. The same goes for USA Today and the Los Angeles Times . . .

[T]he press has never come to terms with the Republican Party’s deep birther roots, and therefore hasn’t come to terms with the radical revolution unfolding on the far right. This campaign season seems like an obvious time to do so. “We need to reckon even more urgently with what can now be called the ‘Trumpists,'” Harvard professor Danielle Allen recently noted, highlighting their birther streak.

[T]hat’s been the press’ telltale failure in covering conservatives and Republicans in recent years: Facts often don’t matter to them. They occupy their own tribal space and digest the same misinformation that simply feeds their often-paranoid views of Obama and Democrats.

As Mother Jones’ David Corn recently noted, “Many Republicans clearly see the president as a foreign-born secret Muslim with a clandestine plan to weaken, if not ruin, the United States–remember the death panels–and they have a dark, nearly apocalyptic view of Obama’s America.”

So why the Beltway press’ reluctance to drill down deep into this troubling phenomenon? What’s behind the Beltway-wide decision to pretend there isn’t something seismic and disturbing going on within the Republican electorate?

Has the modern political press ever had to deal with such a large portion of the partisan electorate that’s actively allergic to facts the way birthers are? Probably not.

But I also don’t think the current path of routinely downplaying the birther phenomenon and its extraordinary pull within the Republican Party is the right way to handle the story. By too often turning a blind eye to the birther juices fueling Trump’s ascension, the press overlooks a defining trait in conservative politics today.

Media laziness allowed America to be duped into the Iraq War disaster.  Media laziness is allowing extremism in the GOP to grow.   It bodes ill for the nation's future.
Posted by Michael-in-Norfolk at Thursday, September 10, 2015

Why aren't the birthers seeking to unseat Ted Cruz, who was not born in the US and whose parents either weren't US citizens or didn't register the birth to a US consulate or embassy? I know it is naive to expect even the slightest consistency or a preference for a rational case, but...