Kim Davis is no Rosa Parks 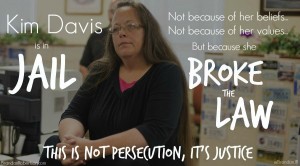 As far right extremist and Christian Dominionists (e.g., Mike Huckabee) continue to engage in spittle flecked rants and even have gone so far as to compare four times married Kim Davis, the jailed Rowan County Clerk, to Rosa Parks.  Such batshitery is too much even for conservative columnist Michael Gerson who takes these extremists to task in a column in the Washington Post.  Here are column excerpts:

Rosa Parks is an American hero, but her case was not an accident. Other African Americans had shown similar defiance (ask Claudette Colvin, who refused to give up her seat nine months before Parks). Civil rights leaders had spent years looking for a favorable case to challenge the segregation of Montgomery buses. Parks’s trip on Bus 2857 was not premeditated, but it was opportune. She was already an activist — known, respected and impressive. Elevating her case was one of the best and most strategic things that the civil rights movement ever did.

Kim Davis — the Kentucky clerk who was jailed for refusing to issue marriage licenses to same-sex couples — has been compared by some conservatives to Parks. Presidential candidate Mike Huckabee, with typical understatement, has described her case as “the criminalization of Christianity in this country.” He compares Davis to Lincoln because “he disregarded [the] Dred Scott 1857 decision that said black people weren’t fully human.”

Bluntly put: Whatever their intentions, these people are doing great harm to the cause of religious liberty and to the reputation of their faith. Davis’s defiance is the wrong test case for the protection of religious freedom.

[T]here is no serious case to be made for the right of public officials to break laws they don’t agree with, even for religious reasons. This is, in essence, seizing power from our system of laws and courts. The proper manner to change the law, in this instance, is to work for the election of a president who will appoint Supreme Court justices with a different view and for the election of senators who will confirm such justices. Or to propose and pass a constitutional amendment. Davis may be impatient with this system, but it is the one we have. Personally assuming the role in Rowan County, Ky., of a Supreme Court majority is not an option.   The available alternatives are to implement the law (as public servants across red America have overwhelmingly done) or to resign in protest. . . .

Huckabee will need to look elsewhere than Lincoln for inspiration on this issue. This is from Lincoln’s speech on the Dred Scott decision:

"We think its decisions on constitutional questions, when fully settled, should control, not only the particular cases decided, but the general policy of the country, subject to be disturbed only by amendments of the Constitution as provided in that instrument itself. More than this would be revolution. But we think the Dred Scott decision is erroneous. We know the court that made it, has often overruled its own decisions, and we shall do what we can to have it to overrule this.”

Whatever your view of Justice Anthony M. Kennedy’s ruling on marriage, granting a wedding license is not in the same category as participating in a legal system that supported chattel slavery. It is, rather, participation in a legal system supporting liberal notions of individual rights. Davis believes that one of those rights is misapplied and misused. That is not the moral or legal equivalent of turning over Dred Scott to the slave catchers.