The Truth About the 2016 Presidential Race 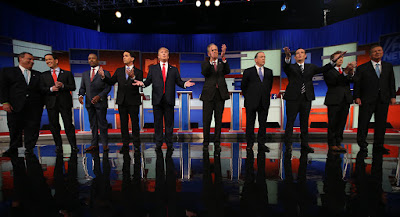 My college classmate Larry Sabato has co-authored a piece in Politico that looks at the circus that is the 2016 presidential nomination contest, especially on the GOP side of the fray.  On the Democrat side, Hillary Clinton remains the most likely winner barring a disaster on the e-mail front, which is yet another self-made Clinton problem.  On the GOP side, it remains a free for all with The Donald dominating even though his winning of the nomination remains a long shot. Despite all the uncertainty, the piece suggests that there are factors to keep an eye on.  Here are article highlights:

Still, the real factors that will decide the contest in 2016 are starting to come into view. As the media’s focus on the horserace intensifies, and they obsess over minor gaffes and meaningless slights, here are eight factors you should keep in mind as you size up the state of the race.

#1. Will a recession doom the Democrats?
A good or even great economy doesn’t guarantee success for the incumbent president’s party—see Al Gore in 2000—but a bad one just might guarantee failure, like John McCain in 2008. That’s not to suggest that the nominees don’t matter—both parties could end up making strong or poor choices—but if there a recession over the next year the Democrats’ chances of retaining the White House could dwindle.

#2. Obama looms over the race.
In the polling era, no major-party nominee has won a third term for his party when the White House incumbent has been below 50 percent. At the moment, President Obama is around roughly 45 percent approval and slightly over 50 percent disapproval in both the RealClearPolitics and HuffPost Pollster averages. No one knows whether Obama will go up, down or stay the same in the 14 months ahead, but to win the Democratic presidential nominee will need Obama either to add a few points of popularity or stimulate disproportionate turnout among those who approve of his performance. It may also be that in this partisan era, voters are more willing to affirm the party of a president whose performance in office they find lacking because they just dislike the other party so much.

#3. Don’t Count Bernie Sanders out in the early states.
Sanders could beat Hillary Clinton in both Iowa and New Hampshire. The most recent polls in those states have found Sanders in his most competitive position yet. The Vermont senator is strongest in the Granite State, where successive polls have shown him leading. In the Hawkeye State, the latest Des Moines Register/Bloomberg survey, run by well-regarded Iowa pollster Ann Selzer, showed Clinton ahead of Sanders just 37 percent to 30 percent, though her leads are larger in other polls.

Aside from threatening in the first two states, the intensity of the crowds attending Sanders’ appearances could translate into electoral victories in several caucuses.

#4. But Clinton remains a strong favorite for the nomination.
Now for the reality check. For better or worse, the Democratic Party has placed an early bet on Hillary. In all the traditional ways—endorsements, money, media coverage—she has lapped her opposition. With respect to her announced opponents, Clinton hasn’t drawn especially potent rivals. (Compare her to Jeb Bush, who intimidated no one and drew 16 competitors on the GOP side despite having the ultimate establishment name and oodles of cash.)

Consider this: As long as the email mess doesn’t sink her, Clinton could lose both heavily white Iowa and New Hampshire, and still have a fairly unobstructed path to the nomination because of her mighty position with women and minorities. This is true even if Vice President Joe Biden enters the race. . . . beating Hillary in 2016 would be much tougher than it was last time.

#5. Most of what has happened so far won't matter.
A few weeks ago CNN produced a list of “jaw-dropping moments” from the 2016 campaign. It included several Trumpisms and items such as Hillary Clinton saying that she and her husband were “dead broke” after leaving the White House. It’s a reasonable and entertaining collection of anecdotes, but we don’t see them having any effect on the election.

The one exception might be Jeb Bush’s repeated stumbles over whether he would have gone to war in Iraq. Bush’s difficulty with the most predictable question he could get is part of a larger problem: His campaign performance been weak so far, and it might be hurting him in his quest to lock up the support of party poohbahs . . .

#6. Keep an eye on endorsements.
As The Party Decides has famously and compellingly argued, endorsements from party regulars, particularly sitting members of Congress and governors, are useful indicators of a candidate’s relative strength or weakness in a nomination fight. So who is winning the endorsement race?

On the Democratic side, the story is pretty straightforward: Hillary Clinton is dominating.

The Republican endorsement picture is far fuzzier. Jeb Bush has earned the most support from GOP eminences, winning 22 endorsements—which is still quite meager.

#7. Trump is still unlikely to be the nominee.
We’re not disputing that Donald Trump is the clear polling frontrunner on the GOP side, or that he has struck a chord with millions of voters unimpressed with politicians that “talk rather than do.” Two other candidates who’ve never held elected office, Ben Carson and Carly Fiorina, are also attracting large shares of support.

However, the Trump candidacy has all the markings of an early bubble that will eventually burst. We’re betting that most Republicans will return to traditional politicians as the election season rolls on.

#8. The 2016 election will be unique.
With a couple of leading legacy candidates, it’s natural for observers to make connections between 2016 and previous presidential elections. Should Clinton and Bush emerge as the major-party nominees, there’ll be comparisons galore to the last race between those famous names in 1992 (or to the 1988 contest that Bush’s father won, and the 2000 and 2004 contests that produced Jeb’s brother’s presidency).

It’s already obvious that Hillary isn’t Bill, despite the fact that scandal seems to shadow them both. Hillary Clinton appears to be more policy-oriented and organized than her husband, but she can’t begin to match his natural political gifts. As for the Bushes, they all have mixed but mainly successful electoral records. However, inspiring rhetoric didn’t get any of them elected, and early impressions suggest Jeb Bush may be the least exciting speaker of the three. Moreover, Bush has a tougher path to victory than his family predecessors, much of that due to his brother’s controversial and unpopular White House record.

Posted by Michael-in-Norfolk at Monday, September 07, 2015