Why We Must Protect LGBT Youth 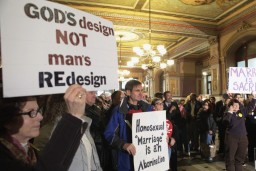 With the continuing circus surrounding Kim Davis' effort to push a Chrisofascist version of Sharia and Republicans racing to prostitute themselves to Davis' spittle flecked, gun totting supporters, one thing is clear: there are a lot of hate-filled people out there and the battle for LGBT equality under the civil laws still has a long way to go.  What is also upsetting is that the vile things being said about gays send a terrible message to LGBT youth in general and those being raised in anti-gay households.  A piece in Huffington Post looks at the situation and the dangers posed to LGBT youth.  Here are excerpts:

These people are a dying breed. Within the decade my guess is they will be nonexistent.

In the longterm, I'm utterly unconcerned. However, I'm a bit worried that violence will rise within the next couple of years, especially toward LGBT youth. The live broadcast of Kim Davis' "liberation" before a cheering crowd surely came off as anti-gay empowerment for some with Mike Huckabee spinning it all into the supposed criminalization of Christianity. I mean, they are really raising the stakes here. If your crazy kind is gasping its last dying breaths, now would be the time to fight back hard.

It worries me a bit. That is why it is important, especially if you live in small rural communities like Rowan County, to vocalize your acceptance of LGBT people. Reassure your youth that there is nothing wrong with them. That they are accepted fully just the way they are.
The bigots might be on their way out, but some won't go without one last fight. Hopefully the fight will just be hot air, and not baseball bats.

As I have said before, forcing anti-gay beliefs on LGBT youth ought to be an official form of felony child abuse.   I just hope the batshitery doesn't harm to vulnerable LGBT youth.  Meanwhile, the sooner Christianity is a dead religion, the better off the world will be.  Ditto for Islam.

Posted by Michael-in-Norfolk at Saturday, September 12, 2015