Donald Trump is Brilliant Revenge on the GOP 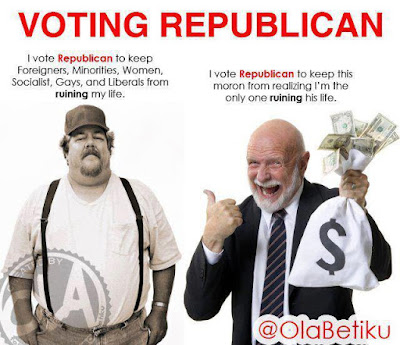 For years the Republican agenda has been to use feigned religiosity, racism, anti-gay bigotry and anti-immigrant animus to dupe large sections of the population to vote against their own best economic interests.  Over time, the current lunacy of the GOP base was built on this agenda that ultimately sought to protect the rich while trashing labor unions and other policies that protected the little man from corporate and Wall Street greed.  Now, that GOP base is perhaps finally beginning to wake up to the fact that it has been played for fools.  Despite his reliance of racism and anti-immigrant fervor, Donald Trump has made comments that the GOP establishment deems to be heresy, including a call for the rich to pay more in taxes.  Some, as laid out in a piece in Salon, believe that perhaps the GOP is headed toward a major realignment such as which happened in the 1890's and first part of the 20th century.  Here are column excerpts:

Why is Donald Trump so popular? He has captured the moment when voters recognize that Republican political rhetoric has nothing in common with reality. Trump brings rhetoric and reality together in a cartoon caricature of a Republican politician that anyone can understand. That gives him a vital role in history. He is the perfect exorcist to drive a stake through the heart of the modern Republican Party. But he is not the first in history to perform this operation. The same crisis hit the party in the 1890s.

When it was over, the nation had a reformed Republican Party, and a new historical era.

In 1986, anti-tax activist Grover Norquist, a former economist for the U.S. Chamber of Commerce, created an army of evangelical voters to boost the numbers behind Movement Conservatism. He promised born-again voters pro-life and pro-Christian activism so long as they lined up behind big business economic policies.

Trump presents a crude version of these Movement Conservative themes.  . . . It is a simple idea: that “takers” want a handout. Similarly, while observers have expressed surprised that the thrice-married, non-churchgoing Trump attracts more support from evangelical voters than, say, the aggressively religious Mike Huckabee, that support reflects a Movement Conservative pattern established a generation ago.

But Trump’s danger to the Republican Party is not simply that he rips the veneer off the racism, sexism, and religious hypocrisy of Movement Conservatism . . . . Trump also articulates the anger of a generation of voters who see that they have been taken for a ride. Movement Conservatives promised voters who were falling behind in the modern world that if they voted Republican, tax cuts and a smaller government would create a roaring economy and they would prosper.

In fact, the opposite was true. Since 1980, tax cuts have not actually lowered taxes; they have moved them from the wealthy onto poorer Americans. The deregulation of the economy has indeed redistributed wealth—upward.

Donald Trump doesn’t simply echo the racism and sexism of the last several decades, he calls—in his loose, vague way—for a fairer tax code and for tariffs to protect American workers. Even more important to his supporters, he is outside politics as usual. He is outside a system that has been bought and paid for by businessmen.

By the 1870s, big-business Republicans leveraged white fears of immigrants and hatred for black Americans to retain control of the government. Democrats who advocated laws that would regulate business were socialists, Republicans insisted. They were intent on redistributing wealth from hardworking white men to lazy immigrants and African Americans. On the Republicans’ watch, the late nineteenth century became the era of the “robber barons,” when monopolies and trusts ran the government with the sole intent of protecting big business. Under Republican policies, wealth moved upward, creating an era historians later dubbed the Gilded Age.

The Populists organized the following year. . . . . Rather than apply accusations of redistribution only to the poor, Populists turned it against the rich. Wealthy men, they warned, had brought the nation to “the verge of moral, political, and material ruin.” . . . . Crucially, the Populists were not Democrats: They condemned both parties. Party leaders on both sides, their platform announced, were willing “to destroy the multitude in order to secure corruption funds from the millionaires.”

The political see-sawing showed that a new era was at hand. Younger Republicans recognized that their party could no longer embrace an ideology that served the wealthy alone. Moreover, they recognized that catering to the super rich was changing the nature of the nation, threatening to turn it from a democracy to an oligarchy. The leader of this Republican reformation was a young upstart named Theodore Roosevelt, and he, and his Progressive Republicans, ushered in the Progressive Era.

The present era is so similar to the late nineteenth century that it has been dubbed the second Gilded Age. In the 1890s, the Populists pointed out that the Republican emperors of their time, the first Gilded Age, had no clothes. Today the unsavory Donald Trump and his supporters are doing the same thing.