Prospect of a Government Shutdown Grows 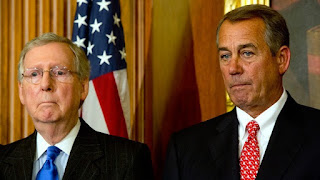 The swamp fever - or perhaps it's a form of rabies - afflicting much of the Republican Party is making the likelihood of a government shutdown increase.  Apparently, these morons have forgotten how the last round hurt the GOP and inflicted economic pain on families and communities.  All because the lunatic fringe of the GOP clings to a fictional book written by ignorant unknown authors.  It goes without saying that in Hampton Roads with its huge federal employee presence, a shutdown could be painful.  It might also motivate voters to punish the GOP in the November state elections. An article in The Hill looks at the growing likelihood of a shutdown.   Here are highlights:

The prospect of a second government shutdown in two years is growing as House conservatives pledge to oppose any funding measure that includes money for Planned Parenthood.
GOP leaders face a familiar problem.

A measure that blocks funding for Planned Parenthood would almost certainly lack the votes to pass the Senate, and would be vetoed by President Obama.

But Republicans in the House don't have enough GOP votes to approve a funding measure that continues funding for Planned Parenthood, and don't want to negotiate with Democrats.

[A]s in past funding fights, they insisted it would be the Democrats and President Obama who would be blamed for a shutdown.

The conservative House Freedom Caucus, with more than 40 members, on Thursday vowed to oppose any spending bill that includes Planned Parenthood funds.

Senate Majority Leader Mitch McConnell (R-Ky.) has been the leading Republican opponent of demands to link an end to Planned Parenthood’s funding with the government-funding measure.

On Friday in an interview with Politico, he sent the signal that Senate Republicans have had enough, calling the linkage “an exercise in futility” with President Obama in the White House.

“I’m anxious to defund Planned Parenthood,” McConnell said, before adding that “the honest answer of that is that’s not going to happen until you have a president who has a similar view.”

[I]t is far from clear that McConnell’s view will sway conservatives in the House, who have viewed him with suspicion.

Speaker John Boehner (R-Ohio), who is getting threats again on his leadership position, has been cautious in his remarks about the House GOP’s next steps.

Majority Leader Kevin McCarthy (R-Calif.) said Friday that the House will vote next week on a standalone bill to defund Planned Parenthood for one year while investigations take place.  But it is unclear that the step will appease conservatives, since the measure would be dead on arrival in the Senate.

“He [Boehner] either has to make a bad deal with Democrats or shut down the government. Those are his unfortunate options,” Rep. Trent Franks (R-Ariz.) said after emerging from a closed-door meeting on Planned Parenthood with 40 to 50 other Republicans on Friday. “I think this can create a civil war in the House of Representatives.”

Other Republicans, like McConnell, want to avoid any repeat of the 16-day government shutdown in 2013 that hurt their party. Their hope is that cooler heads will prevail.

“People remember, we shut down the government over ObamaCare, which was very unpopular,” he said. “Planned Parenthood is not unpopular. Its polling is actually very strong. If you're going to do something that affects funding, you need to make the case.”

Rep. Charlie Dent (R-Pa.), a centrist, agreed a shutdown would be a “tactical and strategic blunder.”

Sanity and logic make it clear that a shutdown makes no sense, especially for the GOP.  However, the religious fanatic element in the House - the media needs to stop using the term "conservative," because they aren't conservatives; they are extremists and fanatics (just like Kim Davis) - care nothing about sanity and logic.  It's all about the supposed dictates of their invisible friend in the sky.
Posted by Michael-in-Norfolk at Saturday, September 12, 2015