Jailing Kim Davis is a Win for Religious Liberty 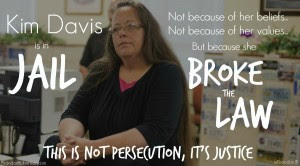 As the far right continues to throw conniption fits and spread lies about the myth of Christian persecution in the wake of the jailing of renegade county clerk, a piece in Patheos makes the case that Davis' jailing is in fact a win for religious liberty.  Why?  Because it makes it clear that government officials do not have the right to force their religious beliefs on other citizens.  Sadly, it's a concept beyond the grasp of the Virginia GOP and much of the national Republican Party.  As the piece notes, if the four times married Davis cannot in good conscience issue marriage licenses to same sex couples, she has an easy remedy: resign.  Here are highlights:


It finally happened. On the morning of September 3, 2015, Federal Marshals placed Kim Davis, the
Kentucky clerk who refused to issue marriage licenses to LGBTQ couples, under arrest for contempt of court. Davis had been refusing to issue licenses in her county for weeks, arguing that she shouldn’t be forced to issue licenses to same-sex couples because it violated her Christian faith.

As soon as the news of Davis’s arrest broke, conservative Christians began referring to Davis as a “martyr”, claiming that her arrest crossed the line into persecution because of her Christian faith.

As an evangelical myself, I want to suggest a different perspective than the one many of my other brothers and sisters have been offering. I believe that Kim Davis’s arrest is neither persecution or an impingement on her religious liberties. In fact, I believe her arrest actually strengthens religious liberty nation wide.

Religious Liberty is a concept that is based on the First Amendment of the Constitution which states “Congress shall make no law respecting an establishment of religion, or prohibiting the free exercise thereof …”  . . . While religious institutions are guaranteed protections against any government regulation or involvement in their religious life, the government is also protected from religious institutions attempt to garner political power over the nation. What this means is that anyone who functions as an agent of the state must remain religiously neutral, providing equal service, treatment, and rights to all people of all religious, ethical, social, and cultural backgrounds.

Kim Davis posed a great threat to the religious liberties of our nation by refusing to carry out her duties as an agent of the state, issuing marriage licenses to all couples, regardless of their sexuality or gender identity. Davis forced her Christian faith on the people of Rowan County, and violated their right to be able to receive equal treatment from the government, regardless of their sexuality, race, religion, or values.

Davis has no right imposing her religious, moral, or political beliefs on any person in her county. Instead, as an agent of the state, she should either do her job neutrally or quit.

The fact that Kim Davis was taken to jail instead of fined is a question of major controversy. Many people believe that this action is too extreme. She should have been fined, many will argue. However, when we consider that Kim Davis has raised thousands of dollars on Indiegogo and has the backing of many extreme right-winged religious and political organizations, it becomes clear that fining her would have done virtually nothing.

It is not uncommon, in contempt of court cases, for a judge to order jail time. Therefore, Kim’s situation is actually not unique. It’s not extreme. It’s actually quite common. And her imprisonment serves as a warning to those in power who seek to impose their religious beliefs on their constituency. It’s a violation of the foundational principles of our country, and there will be legal consequences.

[T]he reality is that Kim Davis is not being persecuted for her faith, she is reaping the consequences of refusing to do her job as an agent of the state. Davis is welcome to hold her beliefs as tightly as she would like, but when she is at work, she needs to do her job. If her job violates her conscience, then she should quit, because imposing her beliefs on the people of Rowan County is not an option. It’s a violation of one of the highest and most sacred American values: Religious Liberty.