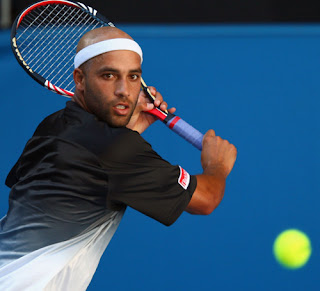 While the apologists on the far right refuse to admit that there are serious problems in many of the nation's police forces when it comes to excessive force against blacks, the wrongful arrest and excessive force used by the New York City police against James Blake a retired Harvard educated tennis star.  Sadly, in the minds of too many police offers, being black - or in Blake's case, bi-racial - automatically makes one guilty and opens the door to abusive force.  Pretending the problem doesn't exist or that President Obama is undermining respect for the police doesn't solve the serious problem.  The New York Times looks at the latest embarrassment to the NYPD.  Here are excerpts:

A New York Police Department officer was stripped of his gun and badge as Mayor Bill de Blasio and Police Commissioner William J. Bratton issued swift apologies on Thursday for the rough arrest of James Blake, the retired tennis star, after he was misidentified as a suspect in a fraudulent credit card ring.

Criticism swirled over whether Mr. Blake had been mistreated because he was biracial. But it was Mr. Bratton’s acknowledgment that excessive force may have been used when an officer threw him to the ground that put a renewed national focus on the everyday arrest tactics long criticized by members of minority groups.

The officers failed to report the mistaken arrest, as they were required to do, raising the possibility that it would not have come to light had Mr. Blake not spoken out.
The officer’s decision to throw an unarmed, compliant man to the ground added to the sense that black people are often roughed up by the police out of view, with few resources to bring attention to their grievances. In a sign of the shifting discourse on race and policing, Mr. de Blasio and Mr. Bratton moved with unusual speed to contact Mr. Blake to apologize. But the gestures also raised questions about whether they would have moved so swiftly if the encounter had not involved a well-known figure.


“This shouldn’t have happened and he shouldn’t have been treated that way,” Mr. de Blasio said in an interview on NY1 on Thursday, echoing remarks made earlier by Mr. Bratton.


The actions of the officer, James Frascatore, were under review by internal affairs investigators and the Civilian Complaint Review Board. At least three force-related complaints, one of which was partially substantiated, were filed against Officer Frascatore, 38, with the review board in 2013, said a law enforcement official, who spoke anonymously because the police inquiry was continuing.

Video of the arrest reviewed by the authorities revealed how a botched sting operation had ensnared a sports celebrity, resulting in his being body-slammed to the sidewalk, according to his account, and handcuffed for 15 minutes on Wednesday afternoon.


Mr. Blake, 35, who retired from tennis two years ago, said the episode had drawn attention to the kind of rough arrest tactics that he believed were all too common in New York City.

“I do think most cops are doing a great job keeping us safe, but when you police with reckless abandon, you need to be held accountable,” Mr. Blake, whose mother is white and whose father was black, said in an interview on ABC’s “Good Morning America.”

The self-effacing tennis star, known on the tour for his speed and sportsmanship, was leaving the Grand Hyatt New York on East 42nd Street around noon on Wednesday to make an appearance for a corporate sponsor at the United States Open when Officer Frascatore, who was dressed in street clothes, barreled toward him.

“This happens too often,” Mr. Blake said, “and most of the time it’s not to someone like me.”

There's more to the story, but you get the drift.  There are many good police officers, but there are a number that have no business wearing a badge and carrying a gun.  Sadly, most internal affairs departments' number one goal is protecting police officers rather than the public.  Until police departments get rid of the "bad apples," they deserve to be viewed with distrust.  It is ultimately their own fault when they continue to have officers like James Frascatore and those who have shot unarmed individuals on their staffs.